A Look Into The Orlando Magic's Draft History

Share All sharing options for: A Look Into The Orlando Magic's Draft History

It's no secret that 'good draft picks' and 'the Orlando Magic' rarely appear in the same sentence together. For instance, you would never hear or read the following:

"You know, the Orlando Magic have made some good draft picks these past couple of years."

If you do hear or the read the following, it's usually said or written in jest.

In the 20 year history of the franchise, when it comes to the Magic & drafting, you can be assured of three things as a fan. First, if Orlando lands the top pick in the NBA Draft, the franchise NEVER misses on a player. Ever. Shaq. Webber. Penny. Dwight. Enough said.

Second, if the team lands a pick outside of the top ten, chances are the team is going to miss on a player, and miss BADLY. Jerryl Sasser. Curtis Borchardt. Reece Gaines. Fran Vazquez. Enough said.

Third, if the team lands a pick outside of the top ten and manages to accidentally make a good pick, chances are the team is going to trade the player almost immediately. Keon Clark. Matt Harpring. Corey Maggette (technically not drafted by the Magic, but acquired on draft day). Zaza Pachulia. Anderson Varejao. Enough said.

It's amazing how bad Orlando drafts. It's downright comical actually. Where am I going with all of this?

Recently, Roland Beech of 82games.com (an excellent NBA advanced stats site, I recommend it) took the time to research, historically, the drafting history of every team in the NBA for the past 20 years. Given that the Magic have coincidentally been in existence for exactly that many years, this data provides an excellent look into how the team has fared drafting-wise historically.

Essentially, Beech wanted to figure out which franchise has had the most success drafting, by using a rather simplistic statistical rating system to determine how good a team's drafted player is/was. Additionally, to calculate the value of a successful pick, Beech compared a player's career stats to the average stats for his draft number.

So with all that said, how did the Magic fair in the analysis? 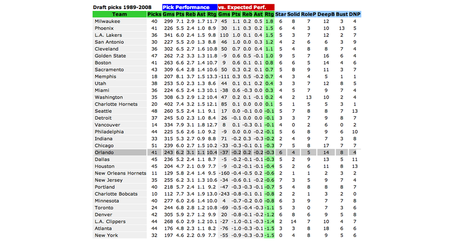 As you can see from the picture above, Orlando places 20th among 32 teams listed (Grizzlies & Hornets are listed twice, FYI). Looks about right. If you notice on the far right-hand side of the graphic, the Magic have had 6 "Star" players, 4 "Solid" players, 5 "Role Players", 14 "Deep Bench" players, 8 "Complete Bust" players, and 4 "DNP" players. It's safe to say that the team has wasted a pick, or two, or twenty-six.

Who are the six "Star" players, you ask? Nick Anderson, Shaquille O'Neal, Penny Hardaway, Mike Miller, Dwight Howard, and Jameer Nelson. Don't take the word "Star" literally. All the word represents, essentially, is a successful pick in correlation to where the player was selected in a respective draft. The four "Solid" players are Dennis Scott, Bison Dele (R.I.P.), Matt Harpring, and Keon Clark.

Taking a quick look at the players listed above, you can begin to understand how the Orlando Magic evolved into a Title contender during the mid-90's. The core of the team (Anderson, Hardaway, O'Neal, Scott) was the built through the draft and helped to establish the foundation for the Magic. A key free-agent signing (Horace Grant) helped take the squad to the next level and in total, Orlando was able to experience a period of success for a number of years.

Likewise, poor drafting in the late-90's and early-00's helped contribute to Orlando's period of mediocrity and eventual demise during those time frames. With players aging (Anderson, Scott) and defecting (Hardaway, O'Neal), the Magic did a poor job of reloading through the draft. The team held eight first-round picks between 1998-2001 and only two of the choices (Harpring, Miller) panned out. To complicate matters, several baffling personnel moves further hampered the team's ability to "relaunch". For example, in the 2000 draft, Orlando sent its tenth overall pick (Keyon Dooling), as well as Corey Maggette, Derek Strong, and cash for a future first-round pick. I could go on but I digress.

However, shrewd roster maneuvering by the Magic (55 transactions involving 51 players in a 15 month time-span), which culminated in the free agent signings of Grant Hill & Tracy McGrady, helped to bring the team back to prominence a bit but unfortunately, injuries (Hill), poor trading (i.e. Cuttino Mobley for Doug Christie, anyone?) and more terrible drafting doomed Orlando from being able to sustain any type of long-term success.

Only now have the Magic been able to firmly reclaim a seat at the adults table and be considered an elite team again. The team copied the blueprint of the Orlando squads from yesteryear and built the roster through good drafting and savvy free-agent signings, sans Lewis' contract amount, etc. The core of the team is evident (Howard, Lewis, Nelson, Turkoglu) and the role players have been defined as well (Lee, Pietrus, and others). It's safe to say that the Magic appear poised to repeat the accomplishments that defined the Shaq & Penny era.