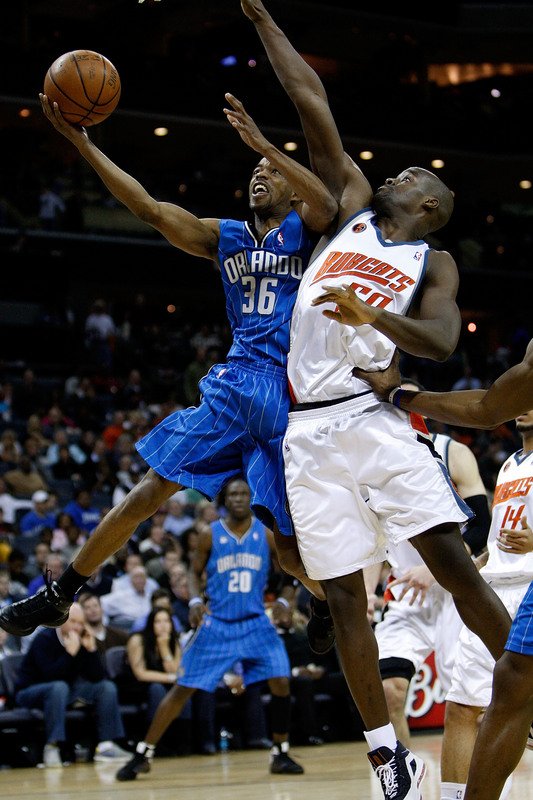 In their first game after acquiring point guard Rafer Alston from the Houston Rockets, the Orlando Magic took the floor at Time Warner Cable Arena and held the host Charlotte Bobcats to a horrid offensive game, winning an ugly contest by a final score of 92-80. Orlando's Hedo Turkoglu looked relieved to have fewer playmaking responsibilities, and led all scorers with 24 points on 7-of-13 shooting. Rashard Lewis' five first-half three-pointers were key in helping the Magic build a 14-point halftime lead, which they did not relinquish. Alston made his Magic debut wearing a nameless #36 uniform which the Magic bring with them on road trips in case of emergencies. He came off the bench and played 28 minutes. Mickael Pietrus returned to his sixth-man role, which returned Courtney Lee to the starting lineup. Unfortunately, Pietrus had to leave the game after spraining his right wrist in a collision with Charlotte's Gerald Wallace. He's listed as day-to-day.

The #36 jersey was comically oversized on the 6'02" Alston. Luckily, he fit the offense much better than the jersey fit him. In the halfcourt, he had no trouble running the high pick-and-roll with Dwight Howard, Tony Battie, or Marcin Gortat; he was equally competent running the pick-and-pop with Rashard Lewis. I had forgotten how fun this team is to watch when it hits its three-pointers and pushes the tempo, which it hasn't been able to do with Anthony Johnson running the point.

Apparently, the Magic had forgotten how to play at that speed too. In his post-game comments, coach Stan Van Gundy noted that Alston frequently had slow down or stop fast-breaks because his teammates could not keep up with him.

Alston tallied a game-high 8 assists with only 1 turnover, but there was one big issue: he missed 8 of his 9 shot attempts. We can't expect him to shoot that poorly every night, and the number of shot attempts doesn't bother me because they came within the flow of the offense. Still, one would hope he could connect on at least one-third of his field goal attempts in his Magic debut.

Orlando completely flummoxed Charlotte's offense. The Magic stayed active in the passing lanes, finishing with 11 steals. More importantly, though, they forced the Bobcats to shoot from the perimeter in the second half after allowing them a few inside buckets in the first. Dwight Howard followed-up his 8-block effort against the Bobcats earlier this week with a 6-block showing tonight. The Magic can live with Raymond Felton scoring 16 points on them, provided he missed 12 of his 18 attempts to get there.

The final score does not indicate, though, how much the Magic's reserve guards killed them. Alston and J.J. Redick combined to shoot 1-of-15 from the field--yes, Redick was scoreless--which is only mitigated by their combined 6 steals and Alston's general competence running the show. Fortunately, Marcin Gortat had a brilliant game in relief of Howard, who battled foul trouble in the second half. The Polish Hammer registered 8 points, 9 rebounds, and 1 block in 13 minutes. He was arguably more effective offensively than Howard, who repeatedly got mugged inside without the benefit of a whistle; he shot only 4 free throws. Although he went 5-of-8 from the field for 13 points, Howard committed 7 turnovers.

Luckily, Hedo Turkoglu was around to rescue the Magic's offense when it needed it. Turk drove the ball to the basket (10 free throw attempts), connected from long range (3-of-8) and was more judicious with his shot selection than in recent games. He looked like the Turkish Wonder who won the league's Most Improved Player award last season.

As pleased as I am with the Magic's performance tonight, a better test of their ability to compete in the post-Jameer-Nelson world will come when they have a poorer night shooting the ball. They shot only 42.5% from the field and 32.4% from three-point range, but much of that is due to their cooling off after halftime. How will Alston and the Magic respond when the team's outside shots aren't falling? Will he call his own number more often? Definitely a development to watch as the season--which looks much brighter today than it did two days ago--progresses.