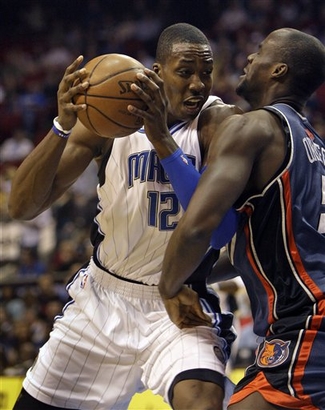 The Orlando Magic rode a career-night from franchise center Dwight Howard as they surged to a 107-102, come-from-behind overtime win against the Charlotte Bobcats. Howard scored a career-best 45 points, grabbed 19 rebounds, and blocked 8 shots to lead Orlando to victory. Bobcats point guard Raymond Felton stuffed the stat sheet with 21 points, 10 rebounds, 5 assists, and no turnovers, but the Bobcats became too jump-shot happy due to Howard's presence in the middle, and thus mustered only 17 free throw attempts; Howard had 18 on his own, and the Magic had 37 as a team. Orlando's free-throw-attempt advantage negated the Bobcats' considerable advantage in field-goal attempts (95 to 80) and points off turnovers (23-16).

Birthday boy Marcin Gortat had trouble selling tickets to this game, but the people who passed on buying them missed a doozy. The Magic dug a hole for themselves in the second period and trailed by 7 at halftime, but improved their offensive execution in the second half (only 3 turnovers, compared to 12 in the first) and managed to take a 92-91 lead with 41 seconds to play. Boris Diaw's runner with 20 seconds to play regained the lead for the Bobcats, and when Rashard Lewis' missed runner on Orlando's ensuing possession wound up in Diaw's hands, the game appeared to be over. When Hedo Turkoglu fouled Raja Bell before the Bobcats were unable to inbound the ball--resulting in a free throw and Charlotte's retaining possession--the game appeared to be well past over.

Bell made the technical free throw, and when the Bobcats inbounded the ball to him, Turkoglu fouled him again. He made the first to give Charlotte a 95-92 lead, but missed the second; Turkoglu atoned for his silly mistake by grabbing the rebound and calling timeout. The Magic trailed by 3 with 13 seconds to play. They were on their home floor. But history was conspiring against them: the Bobcats were 9-0 this season when Felton scored at least 20 points, and the Magic had yet to win a home game in which they trailed after the third quarter.

Fortunately, history did not account for J.J. Redick. With 8 seconds to play, the Magic's fan-favorite, little-used, third-year shooting guard drilled a deep three-pointer while falling on the seat of his pants, which put the teams in a 95-95 tie. Without a timeout, the Bobcats could not design a play, and Felton's off-balance jumper came up short. 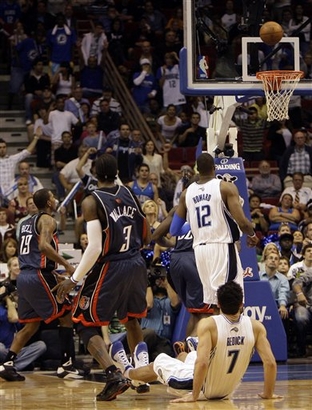 From there, it was all Magic. The Bobcats scored on their first overime possession, but Orlando's Hedo Turkoglu and Howard combined to score the game's next 8 points--6 of them from the foul line--to take a 103-97 lead with 1:10 to play. Dumb luck gave the Bobcats some hope as Desagana Diop--who, in 495 minutes with the Dallas Mavericks earlier this season, made only 7.1% of his jump shots--drilled a 15-footer that Howard wisely yielded him. The Magic put the game away with free throws, and Vladimir Radmanovic's three-pointer with 10 seconds to play turned out to be too little, too late.

Clearly, the biggest story of the night is Howard, who imposed his will on the game like few centers in today's league can. The fact that he posted 45 and 19 on Emeka Okafor, one of the league's best defensive centers, makes his performance all the more impressive. He also drew all 6 of Okafor's fouls. This is not to say that Howard made Okafor look a fool; in fact, Okafor played a fairly sound defensive game, and did about as well as one can expect, given Charlotte's decision to single-cover Howard in order to keep Orlando's perimeter shooters honest. Howard had to work for his points, getting only a few dunk and alley-oop opportunities. Dwight finished rolling hook shots with either his right or his left hand, going from right to left or from left to right. Simply put, nothing could have stopped him tonight.

And that was just his offense.

What might get lost in our celebration of Howard is that it took a career-night from him for Orlando to beat the fourth-place Charlotte Bobcats, who needed 95 shots to score 102 points and who had only two players shoot better than 50% from the field. The let-Howard-do-his-thing strategy nearly worked for the Bobcats tonight, and it did work for the Dallas Mavericks two weeks ago. Teams might start clamping down on the Magic's perimeter players, which will be good for them and for Howard's fantasy-league owners, but bad for the Magic as a whole. They can't count on these Herculean efforts each night.

However, their defense was sound; give them that much. They forced the Bobcats to take long jumpers... and when Felton, a career 39.6% field goal shooter, has it in his mind that he's Kobe Bryant, the defense is doing its job. The long shot attempts lead to long rebounds, which the Bobcats did a good job of recovering, as the above four-factors chart illustrates. Overall, this sort of defensive effort will keep Orlando in lots of games, but it won't win them too many; the offense is, at times, too stagnant for that.

With the win tonight, the Magic's admittedly trivial pursuit of their first season-sweep of the Bobcats in franchise history remains intact. We'll get a chance to see how Orlando responds to this hard-fought win tomorrow night in New Orleans, where they'll travel to face the Hornets.