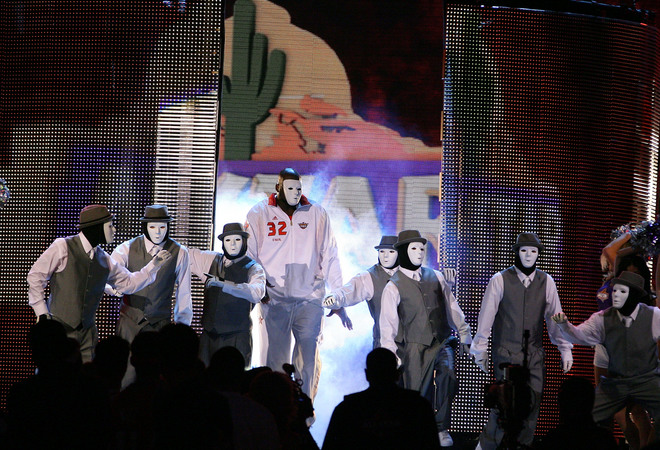 The Western Conference used its incredible size advantage to decimate the Eastern Conference in the 58th NBA All-Star Game, 146-119. Kobe Bryant (game-high 27 points) and Shaquille O'Neal (17 points, 5 rebounds, 3 assists, and 1 block in 11 minutes off the bench) shared game MVP honors. Dwight Howard and Rashard Lewis, the Orlando Magic's two representatives in the game, manned the middle for the East squad, and acquitted themselves. Howard finished with 13 points and a game-high 9 rebounds, while Lewis contributed 8 points and 6 boards off the bench. The sight of Lewis, a 6'10" small forward, forced to guard the 7'01", 330-pound O'Neal was not pretty. But he was not the only Magic player O'Neal embarrassed. At one point in the game, O'Neal bounced a pass between Howard's legs to teammate Chris Paul, who immediately passed the ball back to a cutting O'Neal for an authoritative slam dunk.

The game got out of hand early as the West went on a 19-0 run in the second period, and the East was never able to challenge. The West could not be stopped in the middle.

Now that the All-Star festivities are over, Lewis, Howard, and Jameer Nelson can fly back to Orlando to prepare for Tuesday night's tilt against the Charlotte Bobcats. I wonder how the game might have played how had Bobcats center Emeka Okafor been named to the team as Chris Bosh's injury replacement. He may have been able to defend the painted area for the East with Howard out of the game, freeing Lewis up from the unenviable task of guarding the West's bevy of Hall-of-Fame centers.