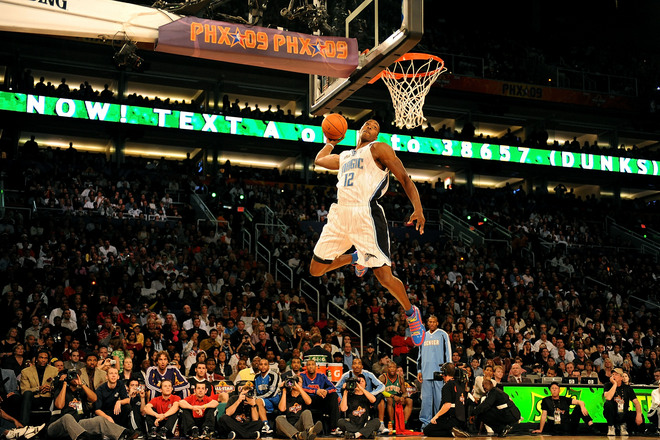 Lewis faced off against Daequan Cook and defending champion Jason Kapono in the final round and appeared to have the contest won after besting Kapono's total. Cook's rough start in the final round seemed to assure victory for Lewis, but he made his last four shots on the final rack to force a tie. The "overtime" period slanted heavily in Cook's favor. Lewis was visibly exhausted and mustered just 7 points; Cook, who has a tighter, quicker release, finished with 19 to win the competition.

The dunk contest provided much more intrigue. Howard and Nate Robinson, a former contest winner, went head-to-head in the final round. Howard's most impressive dunk involved his lobbing the ball off the right side of the backboard, sprinting down the right baseline, catching the lob and finishing strong with one hand. It should have been enough to win, but Nate Robinson played off Howard's "Superman" image by changing into a green-tinted "Kryptonite" Knicks uniform. He then had Howard stand a few feet in front of the rim while wearing his Superman cape. Robinson ran down the center of the floor, leapt over Howard, and dunked a green basketball with his right hand. His showmanship narrowly won him the competition, as he captured 52% of the fan vote. After his win, Robinson admitted that he would not have won without Dwight's cooperation. He could not have been more right. If Dwight had not allowed Robinson to dunk over him, the Krpytonite gag would have fallen flat, and Howard would have won again easily.

An underwhelming dunk contest for everyone, especially Magic fans. Howard's off-the-side-of-the-backboard dunk was the only impressive entry from any contestant. Hopefully, the All-Star Game tomorrow will provide more excitement. 3QC will have an open thread, just like we had tonight and for every Magic game.