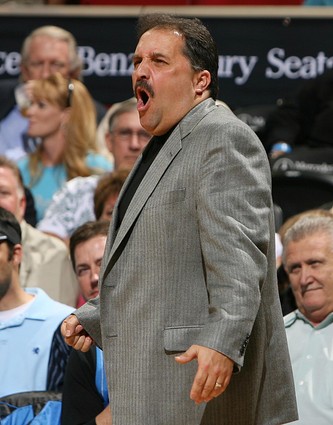 One should expect that some NBA players would perform badly in their last game before the All-Star break, as they may be looking ahead to a weekend of rest and time away from the team. Tonight, the Orlando Magic took that looking-ahead approach to the extreme in their 82-73 loss to the Denver Nuggets. As the four factors table will show, the Nuggets weren't exactly on their game either. Carmelo Anthony scored 29 points--15 of them at the foul line--to lead the Nuggets, while Dwight Howard led the Magic with 16 points on 4-of-7 shooting. The win was Denver's first in Orlando since March 10, 1992, when Stanley Roberts started at center for the Magic. Coincidentally, the Magic committed 28 turnovers in that game. Current Magic GM Otis Smith accounted for a game-high 6 of them in 35 minutes off the bench; he also missed 11 of his 15 shots. But enough trivia.

Tonight, Orlando set season-lows in offensive efficiency, effective field goal percentage, and turnover rate. Dwight Howard was the only Magic player to shoot better than 50% from the field, but he only got 7 shots as the Nuggets routinely double-teamed him away from the ball, or stripped him once he got it. Orlando's starters accounted for all 24 of its turnovers; no starter managed to make more baskets than turnovers. It was a monstrosity, and one I frankly don't want to waste much time recapping. Your life is richer for having missed the game, if you did. Here's the boxscore if you're brave enough to see the gore for yourself.

The score was only close because the Magic were finally able to string together some defensive stops late in the game, and they hit some three-pointers, too. In fact, with 1 minute left, the Magic had two chances to cut Denver's lead to 3 points. Rashard Lewis' three-pointer in transition rimmed out, but he hustled down the offensive board and fired the ball crosscourt to Mickael Pietrus, who was wide-open in the left corner. Pietrus' three-pointer also rattled out, and Carmelo Anthony corralled the rebound for Denver, ending the Magic's comeback bid. That Orlando was able to close the gap on Denver says more about the Nuggets' need for rest on the second night of a back-to-back than it does about the Magic's cold-bloodedness, however.

Every game counts the same in the standings, and obviously I would have loved for the Magic to pick up a win. It would have felt like a hollow victory though, wouldn't it? Does any team that misses 70% of its shots and turns the ball over on more than one-quarter of its possessions deserve to win? No. I'll chalk this loss up to looking ahead to the All-Star Break. If my diagnosis is correct--there's no guarantee it is, obviously--the Magic won't ever play this poorly again this season. One can only hope, anyway.