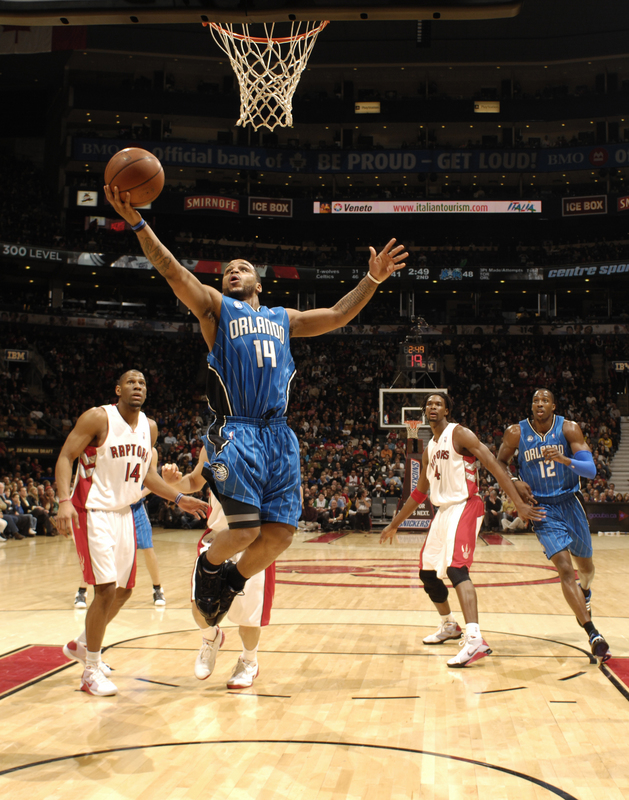 The Orlando Magic used their two biggest weapons--the interior presence of Dwight Howard and their team-wide accuracy from three-point range--to blow the Toronto Raptors away on Sunday, 113-90. Howard finished with 29 points and 14 rebounds, while Orlando blitzed Toronto with 13 three-pointers in 30 attempts, including a 7-of-10 showing in the decisive third quarter. Jameer Nelson recorded 18 points (6-of-11 shooting), 8 rebounds, and 10 assists. Toronto was paced by Jose Calderon's 16 points and 6 assists, but was doomed by a poor showing from franchise forward Chris Bosh. The All-Star and Olympic gold-medalist managed only 11 points (4-of-11 shooting) and 9 rebounds while turning the ball over a game-high 4 times, leading some Raptors fans in attendance to boo him. I question the wisdom of booing an elite player who can walk away in free agency in 2010, especially when he did nothing to warrant the rough treatment.

The Magic looked determined to avenge a rather embarrassing loss to this team in this building a mere 4 weeks ago, when the Raptors rode some hot shooting from role players to get the win. Orlando's execution was much better today; Nelson and Howard repeatedly shredded the Raptors with the pick-and-roll, with Nelson threading bounce passes through defenders to Howard for several astonishing finishes. It wasn't just the pick-and-roll, though, as the Magic moved the ball wherever they wanted to on the floor. The Raptors offered little resistance. One play in particular tells the story: Howard kicked the ball out of a double-team to Nelson on the left wing. Nelson immediately swung the ball to Rashard Lewis in the left corner. Andrea Bargnani, who left Lewis to double-team Howard, saw the ball go to Lewis and sunk his head, jogging to the three-point line to halfheartedly contest the shot. It didn't matter, clearly, as the ball caught all bottom. It was just that sort of afternoon--that sort of season?--for Toronto.

Mickael Pietrus had another efficient game off the bench, scoring 22 points (8-of-17 shooting) in 30 minutes. Orlando signed him for his three-point accuracy and his athleticism, but it was only the latter that got it done this afternoon. Air France missed 4 of his 5 three-pointers, but made up for it by cutting to the rim for layups, following teammates' misses with dunks, and even posting up on the right baseline. His return to the lineup against Indiana earlier this week added a much-needed boost of offense to what had been a fairly inept second unit.

Orlando can't enjoy this victory, which brings them to within a half-game of Cleveland for the East's second seed, for very long, though. The Magic fly back home today (for all I know, they're in the air now) for a game against the Dallas Mavericks tomorrow night.