Are the Orlando Magic Underachieving?

Share All sharing options for: Are the Orlando Magic Underachieving?

The Orlando Magic awoke this morning with a 22-8 record, good for first in the Southeast Division, third in the Eastern Conference, and fourth in the entire NBA. And yet after a season in which they made an astonishing run to the NBA Finals, there's a sense that they're underachieving. Something just doesn't seem right, which has led to more trade speculation and complaining among fans than normal.

What ails the Magic these days? To find out, I compared their statistics from this season to their stats at this point last season. This exercise should prove useful in diagnosing the problem, or problems, that have contributed to an underwhelming season so far.

Given the Magic's roster turnover--five new players, four in the regular rotation--and injury/suspension issues, it's incredible that they've essentially treaded water offensively. Efficiency, shooting, rebounding, and foul-drawing have improved slightly, while turnovers have regressed slightly. And this is a team with Jameer Nelson and Vince Carter, two of its four purest shooters, struggling from the field. It's safe to say that the offense isn't contributing to their failure to impress thus far, and that there's room for vast improvement.

Which leaves the defense:

With the exception of a staggering improvement in defensive rebounding, Orlando's defense has regressed relative to the standard it set last year in every category. The word "relative" is crucial here, since that efficiency rating is still good for 7th in the league. The fact remains, though: for Orlando to duplicate last year's success, and to win a championship, it can't spin its wheels offensively while taking a step back defensively. Either the offense must take a significant leap forward, or the defense needs to return to its form from a year ago.

Now that we know the problem is defense in general, we should try getting more specific. The most jarring figure in the defense table presented above is effective field goal percentage. How have teams managed to improve their shooting--and, in turn, their efficiency--against Orlando, which led the league in defensive efficiency and effective field goal percentage allowed last year? For more on that front, I used Hoopdata.com's invaluable opponent shot locations feature, and compared the two Magic squads in question to each other, as well as to league average.

The first chart will show opponent shot selection by location; the second will show their success rates, also by location. We'll draw our conclusions from there. If you like, you can click on each image to view it in greater detail. 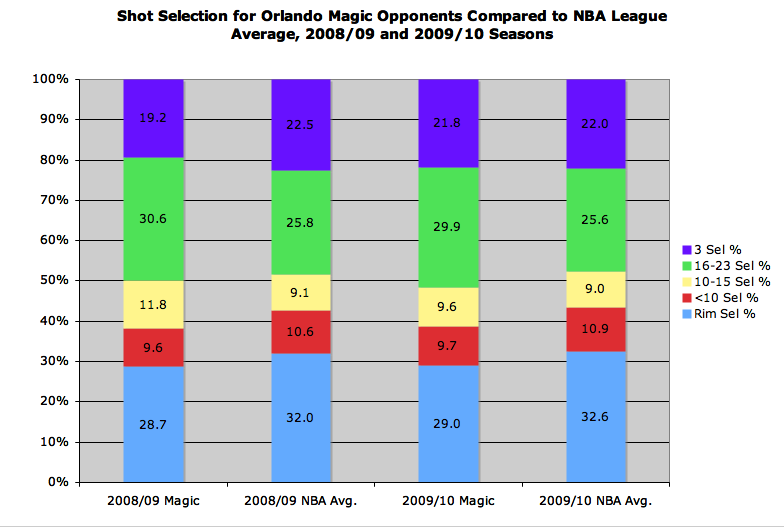 Last season, Magic opponents took fewer three-pointers, shots from within 10 feet, and shots at the rim than the average NBA team, and overloaded in the 10-15 and 16-23 ranges. This season, that trend has held up, with one key difference: Orlando opponents are taking more three-pointers this year than last, chiefly at the expense of shots in the 10-15-foot range.

To understand what the year-to-year variation in Magic opponents' shot selection means, we'll quite obviously need to look at their success rates in each location. 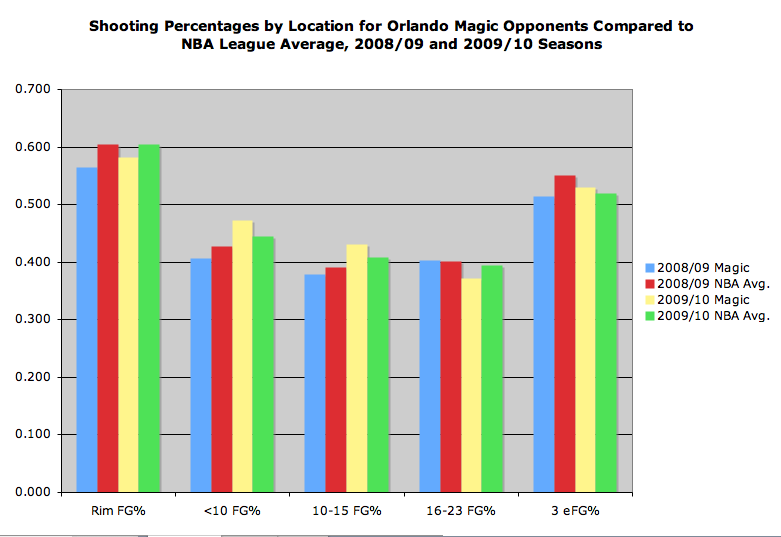 Yeah, this stuff is telling. Last year, Orlando defended each location better than league average except for the 16-23-foot mark, and even then they were only worse by two-thousandths of a point. This year? Orlando's worse than league average in each area except for at the rim--thanks, Dwight Howard!--and, oddly enough, the 16-23-foot portion of the floor. They've significantly regressed in defending the 10 foot area, and in three-pointers. That latter point is the most significant: Magic opponents are taking more three-pointers than they did last year, and making them at a higher rate. Coupled with the increase in free-throw rate, as described in the defense table above the fold, and it's much easier to understand why teams are 5% more efficient overall against the Magic this year versus last year.

There's a big caveat here, and as usual in these sorts of exercises, it's sample size. Even 30 games into the season, one small tweak of any number can have repercussions elsewhere. For instance, take 6 made three-pointers away from Magic opponents this year and suddenly they're shooting the trey at the same clip they did against the Magic last season... which was worse than league average. You'd also have taken 18 points away from the opponent, leading to Orlando having a Pythagorean record of 21-9, or one off last year's pace at this point.

I guess the takeaway from this exercise is this: Orlando's defense has slipped from "elite" to "very good," but its offense has dug in just enough to keep the Magic among the league's overall best teams. It's very far from time to panic in Orlando. For what it's worth, the Magic have put on a defensive clinic since allowing the Heat to light 'em up for 121.2 points per 100 possessions two weeks ago: the Magic have held their last four opponents, which each sport records above .500, to an offensive rating of 93.5 and an effective field goal percentage of 42.9%. In other words, it's a step in the right direction. Given that none of the Magic's next 4 opponents ranks better than 25th in offensive efficiency, there's a great chance that the defensive figures will keep improving, and that we'll have forgotten this December lull within the next month.