In mid-November, I took a look at the Orlando Magic's statistics after the first 10 games of the regular season and noted that Dwight Howard's block percentage (4.4%) matched his career total (4.2%). I wondered whether or not Howard's blocking statistics this past season were an outlier or if he was simply off to a slow start.

It's safe to say that, for Howard, it was the latter.

So far in December, Howard has averaged 3.5 blocks per game and looked every bit the reigning Defensive Player of the Year. As a result of Howard swatting shots at a torrid pace, his block percentage (5.5%) is inching closer to last year's figure (5.9%). Likewise, for the second consecutive season, Howard leads the NBA in rebounds (13.4 rebounds per game) and blocks (2.5 blocks per game). If Howard can finish the regular season leading the Association in both categories, there's a good chance that he can repeat as the NBA's Defensive Player of the Year winner. Whether or not that happens remains to be seen (granted, there are other statistics that show how good or bad a player is on defense). Whether or not Howard deserves it is another topic for another day, too.

For the Orlando Magic and head coach Stan Van Gundy, who openly stated after losing to the Cleveland Cavaliers that Howard - at the time - hadn't been as dominating defensively in games, it's a positive sign that Howard is dominating. For the Magic to be an elite defensive team, Howard needs to dominate and he has. For example, Howard has blocked four or more shots in seven of Orlando's last 10 games. And if the Magic weren't blowing out the Toronto Raptors a few weeks ago, Howard probably would have played more and stood a decent chance of getting 10+ blocks in the game (he had eight).

For all the talk about Howard's offensive repertoire (or the lack of one, depending on whom you ask), people can't criticize him on defense because he is a gifted player on that end of the court.

How so? Let's go frame-by-frame in that game against Toronto to illustrate: 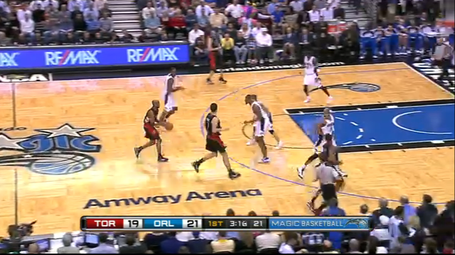 FRAME 1: On this particular possession, Jarrett Jack of the Raptors got the rebound on the other end of the floor off a missed three from Mickael Pietrus and pushed the ball up in transition. It's apparent that Jack surveys the defense and notices that there isn't one Magic player defending the paint. 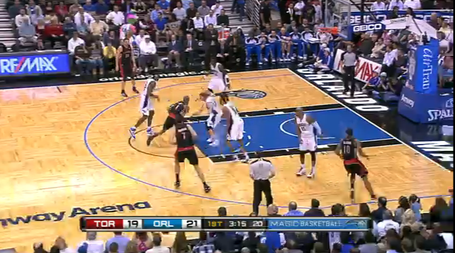 FRAME 2: Jack penetrates, knowing that he's bigger and more athletic than the defender, Jason Williams. Notice someone missing from the action? Chris Bosh hasn't crossed half-court yet, which means that Howard is a free safety on the play because he doesn't have to account for his defensive assignment. 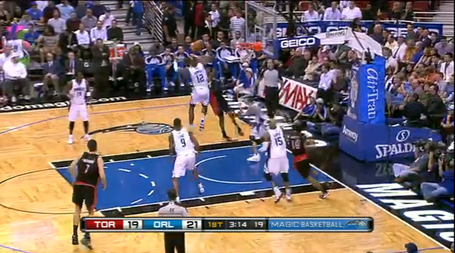 FRAME 3: Jack attacks the basket, thinking he has Williams beat (he does) for a layup. But Howard does an excellent job of sprinting to help his teammate, meeting Jack at the rim, and cleaning up the mistake.

There are many ways Dwight gets his blocks and this is one of them. As Jon Nichols wrote last week, "I'm pretty convinced Howard is reasons one through ten why the Magic are so good defensively every year."

It's easy to see why.