It's Safe to Say That J.J. Redick is Figuring Things Out in the NBA

Share All sharing options for: It's Safe to Say That J.J. Redick is Figuring Things Out in the NBA

There's one player on the Orlando Magic roster who's been turning heads lately - no, not Dwight Howard - and his name is J.J. Redick. Last night against the Utah Jazz, Redick came off the bench and torched Jerry Sloan's defense to the tune of 20 points. And Redick did it in an extremely efficient manner (7-9 FG, 2-2 3PT, 4-4 FT). Efficiency is the name of the game in the NBA and for Redick, he provided a textbook example of how to not waste possessions on offense. Nearly every time Redick attempted a shot in yesterday's contest, he put points on the scoreboard. Thing is, Redick has been doing this all season - he leads the Magic with an Offensive Rating of 125.2 (3rd in the Association and ranked better than some guy named Steve Nash). That's excellent.

Against the Jazz, Redick scored in a variety of ways (via Hoopdata):

In the second quarter, Redick got things going with a jumper off the dribble after Utah's rookie Wesley Matthews, the player defending him, gave him too much space to work with. A few possessions later, and with the shot clock winding down, Redick made a very difficult, off-balance three to beat the buzzer after the Jazz played perfect team defense for 23 seconds. Can't be too surprised that Redick made the shot, given that he's been on a shooting tear lately. With the period winding down, Redick once again operated off the dribble and was able to penetrate into the lane for a layup. What's interesting about this particular play is the fact that Redick was clearly looking to pass before he, at the very last minute, decided to put up the attempt. Whatever works.

Redick didn't re-enter the game until the start of the fourth quarter and it didn't take him too long to score again, as he was able to make a jumpshot off the dribble along the baseline after being set up by a screen from Dwight Howard. A 2/5 pick & roll, in other words. After a few minutes, Redick was able to make another layup off the dribble after being aggressive and attacking the basket. Redick followed that with a three in the corner off a pass from Anthony Johnson on the fast break.

That's the word that perfectly explains why Redick has been playing so well on offense since the start of the regular season. Redick is developing some swagger, too.

There's one more play that epitomizes the confidence Redick has been displaying on offense. For the first time since I've been writing at Orlando Pinstriped Post, I'm going to go breakdown this possession frame-by-frame. 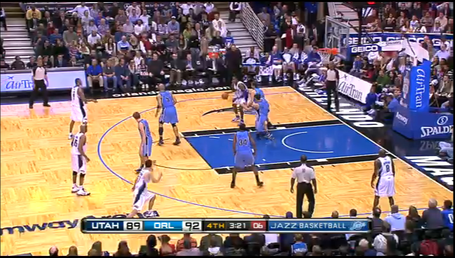 FRAME 1: Orlando sets up in a 4-out/1-in offensive set. With Howard posted up, Utah decides to double-team him with Mehmet Okur and Deron Williams. There's a few things to notice in this screenshot. Despite being double-teamed, Howard has an unobstructed angle to potentially pass to Redick and they both know that (look at Redick's posture; he's getting ready to make a move). C.J. Miles, at the same time, is looking directly at Howard and not keeping an eye on either Redick or Johnson in the corner. 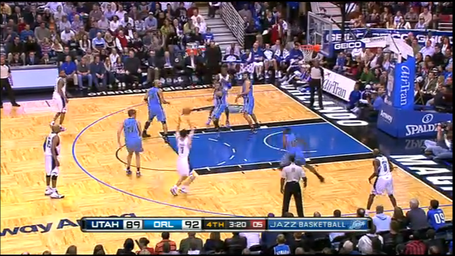 FRAME 2: Howard passes the ball. As such, Miles gambles and sprints to Johnson but makes the wrong decision. Miles realizes, albeit a little too late, that Redick is cutting to the basket. 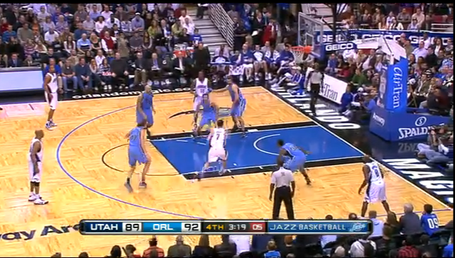 FRAME 3: Redick is left unimpeded in the lane ... 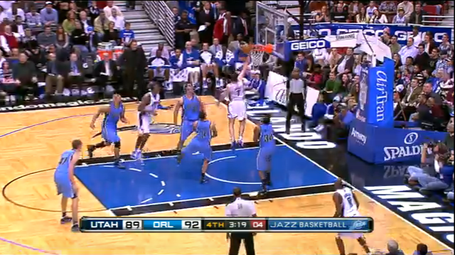 If there's one thing to take away from the Magic's game against the Jazz, it's that Redick is proving to be more than a spot-up shooter. Redick can score off the dribble and opposing defenses are going to have to start realizing that.