Jameer Nelson of Old Shows Up Against the Toronto Raptors

Share All sharing options for: Jameer Nelson of Old Shows Up Against the Toronto Raptors

For the first two games of the regular season, Nelson was content to play the role of facilitator for the Magic. One can't blame him, given the numerous weapons Orlando has at its disposal, offensively. Nelson logged roughly 21 minutes against the Philadelphia 76ers & the New Jersey Nets and chipped in occasionally on offense. However, once Vince Carter went down with an ankle injury in the latter game, Nelson recognized that the Magic needed his offense. Nelson's aggressiveness was on display in the third quarter against the Nets, when he scored 7 of his 9 points during that span, but it was against the Raptors where he was assertive from start to finish.

In the first quarter alone, Nelson scored 9 points against Toronto on a bevy of jumpers in catch-and-shoot situations. One could tell, given that Orlando only suited up nine players yesterday due to an injury (Carter), the flu (Pietrus), and suspension (Lewis), Nelson was looking for his shot. With Nelson in rhythm early in the game, one could get a sense that he was in for a big day.

Nelson was quiet in the second quarter, only connecting on one field goal (a driving layup), but he came alive in the second half thanks to one of the Magic's main offensive sets - the pick & roll. Because people conveniently forget or don't know, it was Nelson that manned the pick & roll the majority of the time last year (51.59%, to be exact) before Hedo Turkoglu came along and took the playmaking reigns due to his injury.  So to see Nelson single-handedly bury the Raptors in the pick & roll was a sight for sore eyes.

The third quarter was an exhibition as to how Nelson emerged as an All-Star point guard this past season. Multiple times, Jose Calderon went under the screen in the 1/5 pick & roll with Dwight Howard and Nelson made him pay every time with three three-pointers (13 points total in the quarter). Not finished, Nelson decided to switch it up in the fourth quarter and attacked the basket off dribble penetration. One time Nelson converted on another driving layup and in other instances, he drew contact for foul shots. 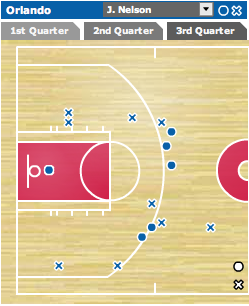