In front of a sell-out crowd at the Amway Arena, the defending Eastern Conference Champions faced off against a playoff foe from the 2009 NBA Playoffs and dominated the action for three quarters. Unfortunately for the Orlando Magic, there was still a quarter to play and the Philadelphia 76ers made the final score look respectable, by the count of 120-106, after trailing by as many as 31 points. Balance was the name of the game for the Magic, as six players scored in double-figures. Dwight Howard led the way for Orlando, notching a double-double with 21 points, 15 rebounds, and 2 blocks. Marreese Speights played outstanding for Philadelphia, scoring a game-high 26 points (10-11 FG) in the loss.

Before tipoff, Orlando's pre-game festivities included a riveting performance of the national anthem by Gina Marie Incandela and a new opening night intro of the team - including a look back at last year's run to the Finals - that featured an introduction sequence projected onto the court. It was a moment that all Magic fans thoroughly enjoyed in the building.

Once that was over, a game was played.

In that game, Orlando showed that its pre-season dominance carried over to the start of the regular season.

Jameer Nelson got things started offensively in the first quarter, doing a great job of attacking and distributing at the right times - nailing a three off a pass from Dwight Howard in the post, scoring a layup off the dribble, etc. Mickael Pietrus also got off to a quick start, getting some easy buckets in transition, and hitting his patented corner three for good measure. As head coach Stan Van Gundy stated to me in the media presser after the game, Pietrus did an excellent job of focusing on both ends of the floor. Especially on defense, where Pietrus effectively shut down Andre Iguodala from doing much of anything by using his athleticism and speed to aid him when necessary.

Early on, the Magic got into trouble by not taking care of the ball and the Sixers capitalized on the opportunities.

However, things began to change once Jason Williams checked into the game late in the quarter. Right away, Williams made his presence felt - making a three off an offensive rebound from Howard, penetrating into the lane for a layup off a nice Brandon Bass screen, and setting up Vince Carter for a three. Williams wouldn't stop there, as the momentum carried over into the second quarter. Early in the frame, Marcin Gortat threw down a ferocious dunk off a 1/5 pick & roll after being a recipient of a nice pass from Williams. After that, Williams nailed two consecutive threes and forced Eddie Jordan to call a timeout for Philadelphia. What was once a 24-19 deficit for Orlando turned into a 41-32 lead (with Williams being responsible for 18 of the 22 points in that span) and the team didn't look back. In the second quarter, the Magic blitzed the Sixers for 41 points. 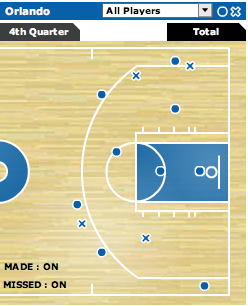 It started with the entire second unit for Orlando, which helped to expand a lead from two to 11 before Howard checked back into the game at the 7:43 mark. Once Howard was in the game, he abused Marreese Speights down low on one possession in particular (forcing Speights to flop in hopes of drawing a foul, but to no avail, before getting dunked on) and the two got into a verbal spat after Speights didn't take too kind to one of Howard's elbows. Howard got hit with a technical foul, of course, for mouthing off. But that minor "inconvenience" didn't deter the Magic from putting on an offensive display that left many people, including myself, in awe. Some of the plays that stood out: Nelson crossing over Willie Green and finding Ryan Anderson for an open three, Matt Barnes with a nifty alley-oop pass to Carter where the latter made the layup from the tip of his fingers, and more.

The ball movement was superb and the execution was crisp.

In the third quarter, it was more of the same as Orlando continued to pile it on Philadelphia. In this particular instance, it was the Howard and Anderson show. Howard, with his array of easy buckets in the lane, offensive rebounds, blocks, dunks, and tip-ins. Anderson, with his plethora of threes (more often than not, with no defender around).

By the time the fourth quarter came, it became evident that the Magic took the foot off the gas pedal. The entire second unit was back in the game for Orlando against a few of the Philadelphia starters but couldn't sustain the lead, forcing Van Gundy to bring back Nelson and Pietrus in the middle of the quarter - momentarily - before taking them out of the game and letting "nature ride its course," so to speak. In this case, seeing a 31 point lead evaporate to a 14 point lead by the end of the night.

Although the final score wasn't as lopsided as it probably should have been, there's no denying Orlando's dominance against Philadelphia when focused at the task at hand. After three quarters, the score was 100-69. The Magic shot 58.7% from the field and 60.9% (14-23) beyond the arc. The Sixers? 44.1% and 25.0% (3-12), respectively. And it wasn't as if Orlando's superb percentages were the case of lucky shots going in, the team was getting its points within the flow of the offense and via open looks. Simple as that. When opponents allow Magic players to get into a rhythm, as efficient as they are, watch out. This isn't the first time one has seen Orlando go nova, offensively.

And it won't be the last.

Defensively, there was a lot to like. As was mentioned before, Pietrus did an excellent job of neutralizing Iguodala and sticking on him. Elton Brand was completely ineffective for the entire contest. Thaddeus Young didn't do much. Philadelphia saw most of its offensive production from Lou Williams, the aforementioned Speights, and the bench. That was it. Credit the good team defense from the Magic for making life difficult on the Sixers. Many times Philadelphia players were deterred from attacking the basket in half-court sets because of Howard's presence in the lane; similar to last year in the postseason for Orlando. That's why taking care of the ball was something Van Gundy stressed for the Magic because the Sixers are difficult to guard in transition. Limit the turnovers, as Orlando did for a majority of the game, and a weapon for Philadelphia is neutralized (fast break offense).

Overall, it was a good performance for the Magic. Could have been a more complete effort but a win is a win. Next, Orlando will be embarking on a mini- reunion road trip, as the team will face off against the New Jersey Nets and the Toronto Raptors during the weekend. For the Magic players, it'll be a chance to re-unite with the likes of Courtney Lee, Hedo Turkoglu, and others.