So far in exhibition play, Ryan Anderson has turned heads in Orlando with his excellent play on offense and starting to make Magic fans recognize that he wasn't just a "throw-in" in the trade that brought him and Vince Carter from the New Jersey Nets during the off-season. Anderson can play, as his statistics in pre-season action after four games poignantly prove - sporting an effective field goal percentage of 62.5%, buoyed mostly by the fact he has shot 50% from beyond the arc (14-28). Because Anderson has played so well offensively, Dwight Howard has stated to me - twice - that he sees him as the "new Pat Garrity", given that they are both deadly perimeter shooters who can spread the floor at the power forward position.

However, is that a fair comparison to make?

The numbers of Kevin Pelton's SCHOENE player projection system and the eyes of David Thorpe would disagree, but what do some of the other statistics say?

I decided to take a look at Garrity's best season as a pro in the NBA and compare his stats to what Anderson was able to produce as a rookie for the Nets this past season. 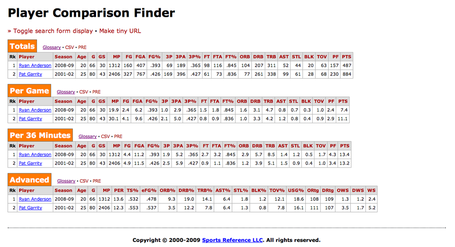 As you can see in the table above, Garrity's career-year isn't better than Anderson's first year in the Association. Although there are similarities in the per-minute data and the shooting efficiencies of both players, Anderson rates as the slightly superior player because of his ability to rebound much better than his counterpart. Safe to say, Anderson's 'floor' as a player is Garrity but his 'ceiling' is much higher.

What other differences are there? The main one, on offense, is the fact that Garrity was strictly a perimeter shooter and Anderson is not. Anderson can do so much more offensively - he can drive to the basket, he can post up, and more. In essence, Anderson has a more complete offensive repertoire than Garrity. Now, people at the Amway Arena haven't seen this "entire package" much when Anderson has been on the floor because more than half of his field goal attempts have been three-pointers. But rest assured, the ability is there, as Anderson put his post-game game on display during the 2009 Orlando Pro Summer League a few months ago. As for everything else, Anderson is more athletic and defensively, has more ability on that side of the ball.

So, what exactly is a fair comparison for Anderson right now?

How about a poor man's Andrea Bargnani? Not a perfect comparison, of course, but for all the hype, money, and talent Bargnani brings to the table for the Toronto Raptors as the first pick in the 2006 NBA Draft, there isn't much of a discernible difference between him and Anderson when you look at the numbers (and that's Bargnani's third season in the NBA). Now granted, Bargnani had a strong second-half last year but it doesn't ignore the fact that him and Anderson have similar offensive skill-sets, for the most part. There's a stark difference, though, between the two individuals when it comes to defending, rebounding, etc (the latter is better). Likewise, John Hollinger projects Anderson to have a higher PER than Bargnani in the upcoming season, though playing time does factor into the projections. Even in that case, it's hard to ignore how the players compared last year.

There are a number of players in the league who one can compare Anderson to, but with all due respect to Howard, Pat Garrity isn't one of them. Anderson is superior.

And when you factor in Stan Van Gundy's ability to maximize potential and talent, as long as Anderson remains with Orlando, who knows how good he can become.