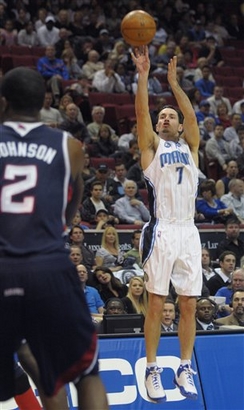 Orlando Magic guard J.J. Redick shoots a three-pointer against Joe Johnson of the Atlanta Hawks in Orlando's 121-87 victory over Atlanta on Friday

In their most dominant performance of the season, the Orlando Magic crushed the visiting Atlanta Hawks, 121-87, thanks to hot shooting from nearly every one of their players in the game. The Magic led by 23 after the first period, by 38 at the half, and by 50 with 2:46 to play in the third period. Hedo Turkoglu paced six Magic players in double figures with 21 points, Dwight Howard added 16 points and 10 rebounds, and J.J. Redick added 15 points in 20 minutes off the bench. Atlanta was led by second-year guard Acie Law, who had 16 points, mostly in garbage time. Hawks All-Star guard Joe Johnson was the only Atlanta starter in double figures; he had 11 points on 4-of-12 shooting.

Apart from the Magic's being outscored in the final period, there isn't very much negative to say about this game. They clearly came out to prove a point, jumping on the Hawks early and executing their offense to perfection. The defense, too, was stellar. Howard blocked or altered every shot the Hawks attempted in the lane, discouraging dribble penetration. Jameer Nelson and Courtney Lee hounded Johnson and Mike Bibby on the perimeter. The Hawks' backcourt simply could not connect from the field.

The most encouraging sign for the Magic was the continued strong play of J.J. Redick, who has taken advantage of injuries to Mickael Pietrus and Keith Bogans and may have secured the backup shooting-guard position for the immediate future. Redick's confidence is unmistakable at this point, as he caught nothing but the bottom of the net on all four of his made field goals--all of them three-pointers--and did not hesitate to shoot. His scoring number is a bit inflated due to the Hawks' being called for four technical fouls, which he converted into three free throws. He also pitched in with 4 rebounds. There was very little not to like from him tonight, or for anyone, for that matter.

The game featured what may be the second-best play of the Magic's season, behind only Hedo Turkoglu's game-winner against Portland last month. Dwight Howard leaked out in transition off one of Josh Smith's numerous missed jumpers. Tony Battie rebounded the ball and gave it to Turkoglu, who threw a lob to Howard from midcourt as all the other players in the building tried to find their spots. Howard finished the play with one hand. If you missed it during the game, you won't have to wait too long to see it again. It'll make the highlight reels.

Rashard Lewis was perhaps the least impressive Magic starter, but I have to give the team credit for running nearly every play for him at the beginning of the third quarter, and to give him credit for converting on those opportunities. Lewis got into a bit of a groove and finished with 13 points on 4-of-9 shooting, which is respectable given his 1-of-5 shooting performance in the first half.

I won't belabor the point, but suffice it to say that the Magic played a fantastic 48 minutes of basketball tonight. They did not take their foot off the Hawks' throat--yes, they were outscored, 27-18 in the fourth quarter, but the effort was there--and soundly defeated a tough divisional opponent. The victory is the Magic's 3rd straight overall, and 11th straight at Amway Arena. The Magic won't put the latter streak on the line until January 22nd against Boston; they now embark on a four-game road trip during which they'll face division-leaders Denver, Los Angeles, and San Antonio, as well as Sacramento. That's a rough stretch, but this team can certainly handle it.