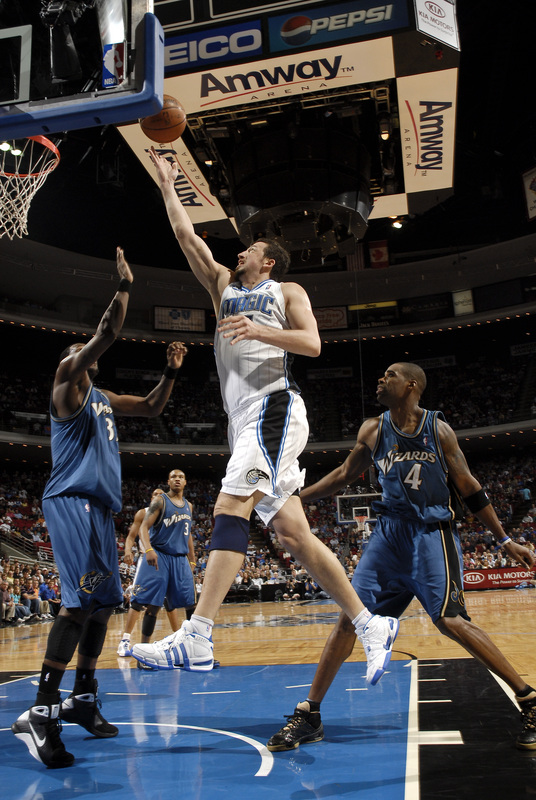 This game brought to mind the Magic's last home contest, last week against Miami, in which they won ugly in a good way. Tonight, they won ugly, but in a bad way. The win over the Heat was impressive because the Magic held Dwyane Wade, the league's leading scorer, in check for most of the second half, and played tight defense down the stretch overall. Tonight, they simply played sloppy. They held the Wizards to only 6 points in the second period--or did the Wizards limit themselves to 6 points?--yet scored only 16 themselves. The 22 combined points for both teams in the period was an Amway Arena record-low. Caron Butler, who went scoreless in the first half, nearly equaled that total himself in the third quarter, with 21 points. His hot streak prompted Stan Van Gundy to use the tall lineup of Jameer Nelson, Turkoglu, Rashard Lewis, Tony Battie, and Dwight Howard for the first time this year. Courtney Lee is a better individual defender than Turkoglu, by leaps and bounds, but doesn't have the size to match-up well with Butler. The Magic could have put Godzilla on him and it wouldn't have mattered. Butler was simply unstoppable, swishing reasonably well contested jumpers.

It didn't help that the Magic's offense stagnated around the same time Butler heated up. The passing wasn't crisp, to say the least. And even when the ball did move, the players had a tough go of actually putting it in the basket. Nelson, Lee, and Lewis combined to shoot 12-of-36 for 34 points. Luckily, Turkoglu bailed the Magic out by snapping out of his recent funk to score 22 points on 12 attempts. Turk was the only Magic player who drove the lane consistently--although Nelson made several drives in the closing minute, looking to put the game away with higher-percentage shots--and was rewarded with 10 free throws. Better yet, he converted on 8 of them.

I'd be wasting your time if I went into greater detail about this game, frankly. Turkoglu was the difference, as was Howard's ability to clean-up misses around the rim. Even then, his focus on both ends of the floor seemed to wane in this game. Only Turkoglu, J.J. Redick (8 points on 4 attempts, 3 rebounds, 1 steal in 18 minutes), and Marcin Gortat (2 points, 7 rebounds, 2 blocks in 10 minutes) played well, which leads me to believe the Magic are in for a rough go of it tomorrow night in Atlanta. This poor effort only barely nudged them by the East's worst team tonight. Imagine what it'll do against the fourth-place Hawks tomorrow.