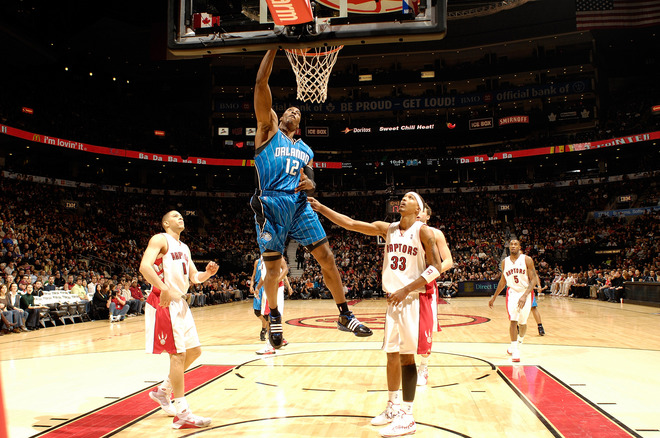 The Orlando Magic got a career-high-tying 39 points from Dwight Howard and a career-high 9 assists from Rashard Lewis, but it wasn't enough to overcome a Toronto Raptors team led by Anthony Parker's 26 points. Poor defense and execution down the stretch caused Orlando to lose for just the third time this season after winning after three quarters; the Raptors improved to 2-17 when trailing after three quarters. Talk about improbable, right?

As frustrating as this loss was for the Magic, they should know that they won't lose too many games in this fashion. When the Magic make 15 three-pointers in a single game, they're nearly impossible to beat. But what's even more impressive is that the Raptors won despite making only 3 triples of their own, while matching the Magic in eFG%. They got their share of wide-open layups and dunks, but made several jumpers that, quite frankly, they usually miss. Parker did most of the damage, slipping by Keith Bogans and Courtney Lee on backdoor cuts. But Parker wasn't the only role-player who pestered the Magic today. Will Solomon and Roko Ukic, the Raptors' backup point guards pressed into action due to the absence of usual starter Jose Calderon, combined for 23 points (9-of-14 shooting), 11 assists, and 4 turnovers. The Magic's defense was straight-up lax today, and I don't expect they'll play this poorly again on that end anytime soon.

Apart from the horrendous defense, the other big surprise for Orlando was the fairly solid play from J.J. Redick. Bogans' ineffectiveness on both ends of the floor, coupled with some miscues by Lee, forced Stan Van Gundy to dust Redick off and play him down the stretch. Redick responded with 8 points in 18 minutes, and although he played good defense overall, he made two huge mistakes that loom large over this loss. First, he bumped Jason Kapono in the lane as Kapono lofted in a running hook. Kapono converted the three-point play on what was only his 14th free-throw attempt of the season. Later, Redick gambled for a steal on a pass intended for Parker, who grabbed the ball and hit a baseline jumper to give the Raptors a 99-98 advantage with 3:38 to play. Lewis answered with a three-pointer for Orlando, but the Raptors scored 9 of the game's next 10 points to put the Magic away.

For the first time in recent memory, the Magic have lost 2 straight road games. D'OH! The Magic lost in Detroit on Monday, but won in Chicago on Thursday. Nope, they're not on a road losing streak at all. My bad. - BQR. The timing on this one is awful, since the Magic face resurgent Washington on Tuesday before a home-and-home set against fourth-place Atlanta and a visit to San Antonio to play the perennial title-contending Spurs. The Magic need to recover defensively, and need to get Hedo Turkoglu going, if they hope to come out of those games on top. Turkoglu almost single-handedly gave the Raptors the game, committing 5 of Orlando's 12 turnovers and missing 8 of his 12 shots from the field.

I hope the Raptors relish this victory while they can, since they likely won't play this well again at any point in the season; this game will prove to be their signature win of the year. Congratulations to them. Based on pure talent, and even when they're completely healthy, they'll lose to the Magic 7 times out of 10. They put in the extra effort today and earned the victory.