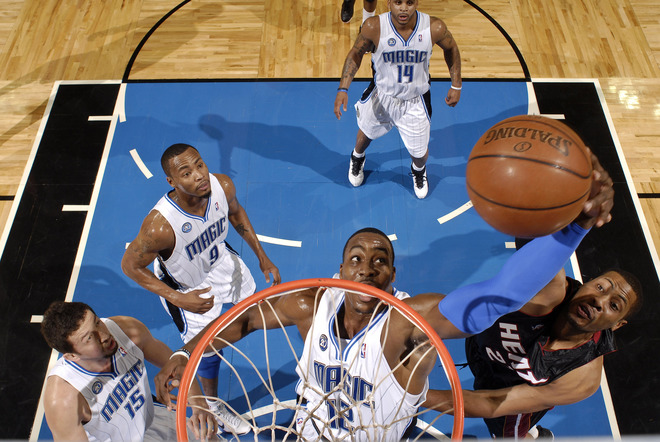 The Orlando Magic's Dwight Howard snatches a rebound away from Jamaal Magloire of the Miami Heat in Orlando's 86-76 victory over Miami on Friday night. Howard led all players with 15 rebounds.

The Orlando Magic and the Miami Heat fought hard for all of Friday night's game, but in the end, the Magic's defense prevailed and Orlando won its 9th consecutive home game to bump its record to 26-7 overall. No team led by more than five points until Hedo Turkoglu made one of two free throws at the 8:06 mark of the fourth quarter to give Orlando a 73-67 advantage. Dwyane Wade led all scorers with 33 points, but no other Heat player registered more than 12. Rashard Lewis led Orlando's balanced attack with 17 points, while Jameer Nelson added 16 and Dwight Howard 15. Courtney Lee poured in 10 points off the bench and held Wade to 0 points on 0-of-2 shooting (only 2 attempts!) in the final period.

Wade might have proven to be the Magic's most valuable player. He got into such a groove shooting jumpers that he rarely ventured inside to draw contact, his usual modus operandi. Wade, who averaged 10.1 free-throw attempts per game, got to the line just twice tonight... and one of those tries came after he somehow rattled home a jumper after fooling Keith Bogans to jump into him. Additionally, Wade was so hot early that it made little sense for the Heat to get anyone else going offensively. When he finally ran out of gas, so to speak, the Heat had no other offensive options. Credit the Magic for their swarming defense.

This sort of game, a hotly contested, back-and-forth affair, is just what the Magic needed to wake up. They had cruised in their last several victories, thanks in large part to their offense firing on all cylinders. But with the shots not falling tonight--Hedo Turkoglu was a miserable 1-of-14 from the field, despite taking few (if any) bad shots--the Magic were forced to amp-up the defensive intensity and hustle, and the result showed. So great was Dwight Howard's presence in the lane, and so great was the Magic's perimeter defense's funneling ballhandlers to him, that several Heat players found themselves suspended in midair with neither a shot nor a pass. Udonis Haslem was the main beneficiary, as he leaked out for several safety-valve jumpers, but overall the Magic shut down the Heat's offense. They got very few good looks at the basket.

Where the extra effort also showed up was on the offensive glass. The Heat aren't a great defensive rebounding team to begin with, but the Magic nonetheless took advantage of their lack of bulk inside, grabbing 17 offensive boards... or exactly one-third of all their available misses. Reserves Tony Battie and Marcin Gortat deserve praise with their active hands, tipping balls out to teammates. Courtney Lee, too, contributed in this area. Everyone gave a great effort tonight, which is why I don't mind the 38.2% shooting so much. The Heat did a great job closing out on the Magic's shooters, and the open shots that they usually make just would not drop tonight. That's okay. Team-wide cold spell. Flukey. Shouldn't last long.

Final note: it was a bit of a playoff atmosphere in Amway Arena tonight, or at least it appeared to be on television. Although some fans headed to the exits after the Magic took control late in the fourth period, the stands were mostly full when the Magic dribbled out the clock--appropriately enough, they earned that privilege after grabbing an offensive board--and the fans gave their team a standing ovation. Make no mistake: the Heat made the Magic work extremely hard for this win, but they were able to get it done.

The Magic's next two games are against Washington and Toronto, teams currently out of the playoff picture. They need to take care of business in those games, since they're followed with a home-and-home set against always-pesky Atlanta, then a trip out west to see Tim Duncan and the Spurs once more. Hoepfully, the Magic will take advantage.

Great win tonight, even if it wasn't always pretty (although the Lee-to-Battie alley-oop in the second quarter was nice, as was the Nelson-to-Howard one late in the fourth that punctuated the win). Magic fans should be very proud of their team.