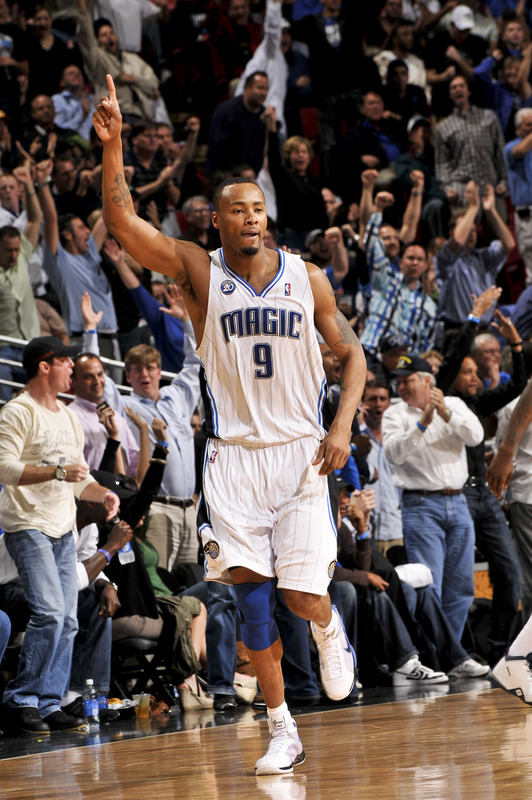 After playing lax defense in a tight, back-and-forth first half, the Orlando Magic shut down LeBron James and the Cleveland Cavaliers in the second half, holding them to 32 points as the Magic won, 99-88, in a game that was not as close as the score may indicate; Cleveland scored the game's last 14 points. The Magic held James to 23 points on 10-of-27 shooting. Dwight Howard led Orlando with 22 points and 18 rebounds, while his fellow All-Stars Jameer Nelson and Rashard Lewis scored 18 and 19, respectively.

This game was an odd one for the Magic in that they managed to win easily despite playing at a slow pace. But when Dwight Howard is controlling the lane the way he did tonight, Orlando is a difficult team to beat. Anderson Varejao has a reputation as a good defender, and I won't dispute that too heavily, but he simply let Dwight get position entirely too close to the rim. Howard got good looks from close to the hoop all night, and also benefitted from his teammates' misses, occasionally following them in with an emphatic slam.

But the real story tonight was defense. After allowing Wally Szczerbiak to score 15 points on 5-of-5 shooting in the first half (?!?!), the Magic buckled down in the second half, and Cleveland wasn't able to get into any sort of offensive rhythm. The Cavs were at their best when James was zipping passes to cutters in traffic; unfortunately for them, their off-the-ball movement was poor tonight. There's been plenty of talk this season, especially lately, about how Mo Williams has energized the Cavs' offense, but tonight it looked pretty similar to what we've seen from this team over the last several seasons: a lot of LeBron, a lot of dribbling, and not a lot of good shots. Williams, by the way, added 12 points on 4-of-15 shooting, and thus the Magic avoided the dreaded Mo Williams All-Star Snub Revenge GameTM for now.

Orlando didn't play exceptionally well tonight, but it did show that it can beat elite teams with its defense. The Magic won't win too many games when Hedo Turkoglu missed 14 of his 22 shots; of course, one could argue they won't lose many games when Howard goes for 22 and 18, or when Jameer Nelson drills 4 threes in 6 attempts.

My favorite play of the night, more than any of Dwight's dunks or Jameer's three-pointers, was a Courtney Lee layup in transition. Lee was all alone at the head of the pack, with James hot on his trail. Lee didn't panic, anticipated James' shot-block attempt, and shifted the ball accordingly so as not to end up on the wrong end of the highlight-reel. A heady, mature play from the rookie, who earlier in the game converted a layup around James, and made two free throws after getting clobbered by Sasha Pavlovic.

I'd like to conclude this recap by recognizing the strong play of Anthony Johnson off Orlando's bench. A.J. doesn't get much love around these parts, but he played his heart out tonight. He scored 9 points in 17 minutes, and added 2 rebounds and 2 assists for good measure. His pull-up jumper at the third-quarter buzzer gave the Magic a five-point lead, not to mention some momentum, heading into the final frame.