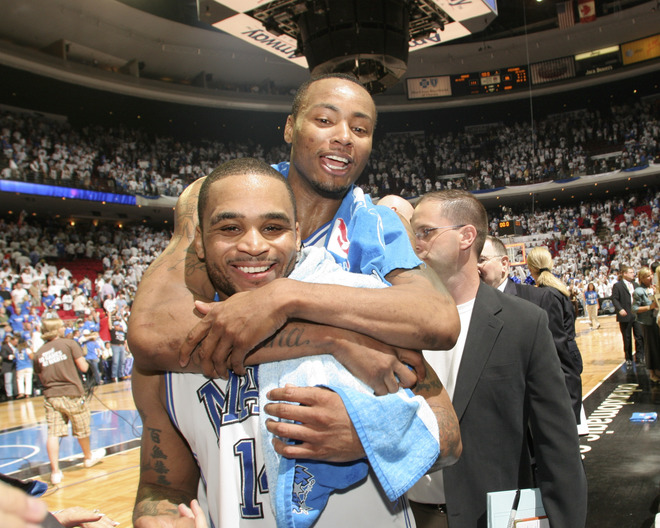 Orlando Magic teammates Jameer Nelson and Rashard Lewis, seen here celebrating after a playoff victory, have been named to the Eastern Conference All-Star Team, according to Yahoo! Sports

According to Yahoo! Sports' Adrian Wojnarowski, Jameer Nelson and Rashard Lewis of the Orlando Magic have made the 2009 Eastern Conference All-Star Team as reserves. They will be joined by Paul Pierce, Joe Johnson, Chris Bosh, Devin Harris, and Danny Granger.

Their selection gives the Magic a league-best three All-Star representatives, as Dwight Howard will start in the game for the second consecutive season.

Congratulations to Rashard and Jameer for a job well done. To be completely honest, I'm not sure how Lewis merits inclusion in the game over Boston's Rajon Rondo, but I cannot--and will not--complain about the Magic's having three representatives, especially after Hedo Turkoglu got jobbed last year.

UPDATE: Jameer is also slated to take part in the Skills Competition, according to John Denton.