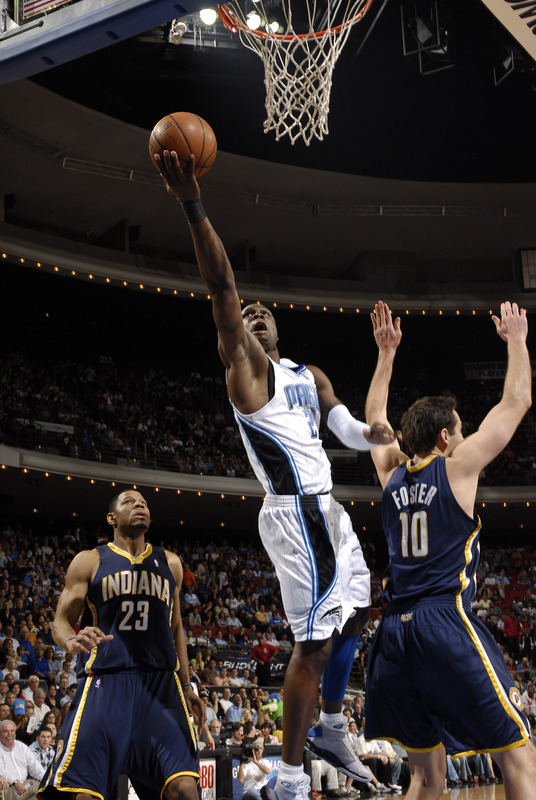 In a game which featured little drama or defense, the Orlando Magic walloped the Indiana Pacers, 135-111, to break their two-game losing streak. Mickael Pietrus turned in one of the best games of his career in his unexpected early return from a wrist injury, scoring a game-high 27 points and grabbing a game-high-tying 10 rebounds in 30 minutes. He was one of eight Magic players to finish in double figures. T.J. Ford led the Pacers with 23 points, but Indiana's star forward Danny Granger had a miserable night with only 10 points on 4-of-14 shooting in 28 minutes.

Both teams were careless with the ball, and Orlando's turnover problems kept Indiana in the game early. Then, at the 5:28 mark of the first period, Pietrus entered the game and made an immediate impact, accounting for 10 of Orlando's 12 points during a 12-2 run in the next 2:24 of the game, during which Indiana coach Jim O'Brien burned two timeouts. It's hard to imagine a better return to action for Pietrus.

As I alluded to, he wasn't the only Magic player getting in on the action. Hedo Turkoglu and Jameer Nelson got into the paint at will, picking the Pacers' defense apart with savvy drives and kick-outs to open shooters. Dwight Howard had it going on early, against the hopelessly overmatched Troy Murphy, but he fumbled several balls away and ended up with 6 turnovers. The Magic kept their foot on the gas offensively, even in the rout, as coach Stan Van Gundy used an 8-man rotation of the starters, Pietrus, Anthony Johnson, and Tony Battie; he only emptied his bench with his team leading, 125-100, with 4:43 to play.

Van Gundy could not have been pleased with his team's defense tonight. Granger and Mike Dunleavy, the Pacers' best offensive weapons, had poor shooting nights, but Indiana still hung 111 points on the Magic in a 100-possession game. Ford appeared to take his abuse at Nelson's hands during last year's playoffs personally, continually challenging Nelson off the dribble, and rarely looking to pass. Orlando native Marquis Daniels got several open looks right at the basket off savvy cuts and finished with 16 points. Even the unheralded rookie Roy Hibbert got in on the action with 12 points in 15 minutes.

All in all, the good news is the Magic were able to get themselves back on track with a fairly easy victory, and in so doing rest their key players for much of the game. The bad news is their defense is still lax. For the first time all season, Orlando has surrendered offensive ratings of 110 or greater to their opponents in three consecutive games. They'll have to tighten it up considerably before Thursday's game against the Cleveland Cavaliers, who boast the world's best all-around player and the NBA's most efficient offense.

I'll say this much for the Magic's defense, though: when they forced the Pacers into a miss, they did a darn good job of making sure that was it. Indiana managed just 4 offensive rebounds--none in the second half--so credit the Magic for that much.