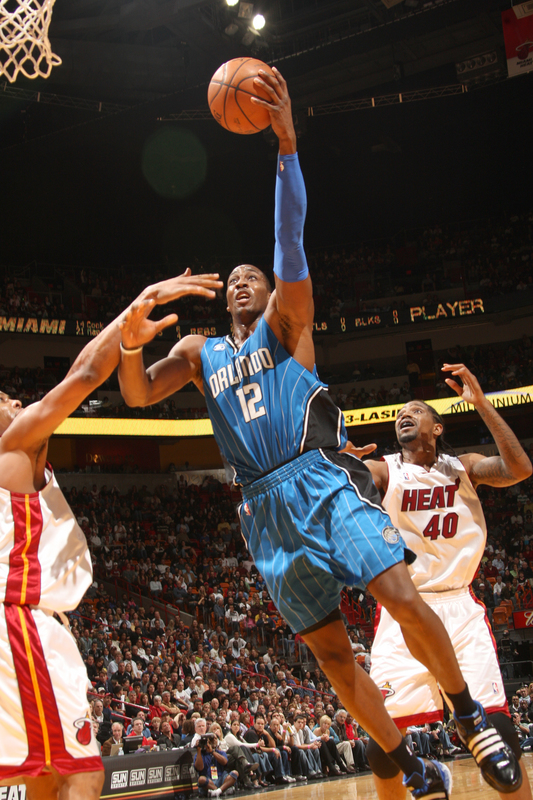 In what many fans will regard as the team's toughest loss of the season, the Orlando Magic fell to the Miami Heat on Saturday night, 103-97. The Magic trailed by 15 to start the final period before rallying to knot the score at 94 with 2:47 to play, but four straight points from Miami's Udonis Haslem put the game away. The Magic have now lost two straight games for the first time since they started the season 0-2.

There are two particularly jarring stats in this game, the most significant of which you see in the chart above. In an 87-possession game, the Heat committed only 4 turnovers; the Magic committed 14. Of particular note is that Dwyane Wade, who has turned the ball over a league-leading 152 times this season, did not have any of those turnovers. It was only the eighth time in 357 career games--and the first time since the 2005-2006 season--that Wade did not commit at least 1 turnover. The Magic held narrow edges in each of the other key statistical categories, but it was their inability to take care of the ball, coupled with their inability to force Miami to make mistakes, made a huge difference.

The second jarring stat is in bench production. The Heat got 39 points on 11-of-32 shooting from their bench, compared to the Magic bench's 13 points on 5-of-13 shooting. That the Magic got next to nothing from their bench isn't too surprising, given their lack of production over the course of the season. But the Heat got meaningful contributions from some unlikely sources: Chris Quinn scored 10 points in 15 minutes, and made two three-pointers late in the third quarter to keep momentum moving in Miami's favor. Mark Blount, who hadn't appeared in a game since December 14th, also made a three-pointer in the third period to compound Orlando's frustration.

"Frustration" is indeed the word of the night for Orlando and its fans. Dwight Howard earned two technical fouls for his first career ejection, while his teammate Anthony Johnson and head coach Stan Van Gundy also picked up techs. Courtney Lee and Hedo Turkoglu missed reasonably open layups, and seemingly everyone was guilty of missing at least one open three-pointer. Defensive intensity was horrible in the first half, and even when they turned it up a few notches in the second half, the Heat were either able to convert difficult shots at the shot-clock buzzer, or to bait the Magic into committing a foul.

The most frustrating thing, though, is the way in which the game ended, the reason why Dwight picked up his second technical foul. Courtney Lee hit a running jumper to bring the Magic to within 3 points, 100-97, with 1:21 to play. Howard rejected Haslem at the rim on the Heat's next possession; Daequan Cook recovered the carom and missed at the shot-clock expired. Howard rebounded, and the Magic went into their offense. They fed Howard on the left block, as he was working against Mark Blount, an inferior defender. The Magic did the same thing two possessions ago, and Blount intentionally fouled Howard to put him on the foul line, where he made one of his two shots. Again, Blount intentionally hacked Howard in full view of the official... but there was no call on this play. Mario Chalmers recovered the loose ball for Miami. The Heat did not score on the ensuing possession--in fact, Howard erased another shot at the rim--but the point stands: he should have been on the foul line for a chance to bring the Magic within 1 point, rather than sprinting back on defense.

On the possession resulting from Howard's second block, Jameer Nelson dribbled into the lane from the right lane, but Chalmers stripped him cleanly and threw the ball ahead to Cook. Rashard Lewis wrapped him up, and as the players made their way to the free-throw circle, Howard had a few too many words with one of the officials, and got tossed. Yes, he had a legitimate complaint--I'm sure Magic GM Otis Smith and coach Van Gundy will send film of the foul in question to the league office--but, with his team only trailing by 3, he should have kept his head. Chalmers made the technical free throw to make it a 4-point game with 1 second to play, putting it out of reach.

Just a tough, tough, tough loss to swallow. Give Miami credit for playing hard and smart against a far superior opponent. But also give the Magic some credit. They played brilliant defense for most of the fourth quarter and put themselves in position to win, despite trailing for almost the entire game. They also held a huge, 24-16, rebounding advantage in the second half. But none of that was enough to overcome their poor first-half defense.

I guess I'll put it this way: the last time the Magic lost two straight games, they won 33 of their next 39. Much will be written in the coming days about the Magic's return to earth, but don't buy it just yet. This rough stretch is a test of the team's mettle, not a harbinger of doom.