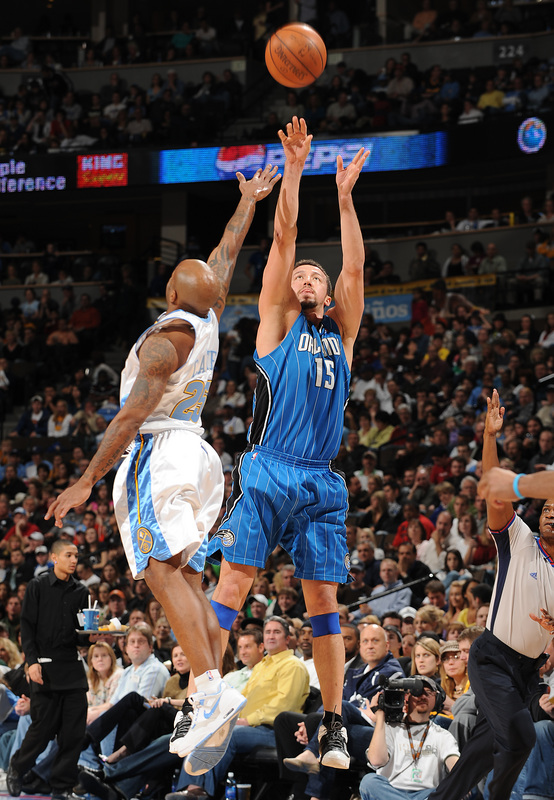 The Orlando Magic got off to a rough start against the hosts Denver Nuggets on Saturday night, but came back stronger in the second half to turn what had been a close game into a rout, as Orlando won big, 106-88. Hedo Turkoglu scored 12 points in the final 4:58 of the third period, including a deep three at the final buzzer, to emerge as Orlando's difference-maker. By and large, Denver's bench outplayed its starters, as reserves Linas Kleiza, Chris Andersen, and Anthony Carter paced the Nuggets in scoring, rebounding, and assists, respectively. Noted Magic-killer Chauncey Billups managed to score 18 points, but shot just 6-of-17 from the field and committed 3 turnovers.

The game was not one to save for the time capsule. Neither team played particularly hard or well in the first half, which was made all the more unwatchable by the bevy of foul calls the officials levied against both teams. The Magic lost Dwight Howard and Turkoglu to foul trouble in the first half, leaving Jameer Nelson to pick up the slack like he did late Friday night in Los Angeles. Nelson scored 21 of Orlando's 47 first-half points, driving into the teeth of Denver's defense for layups or otherwise spotting-up from the outside. He cooled off in the second half, making just one more shot, but his services weren't needed.

Indeed, the Nuggets came out flat in the second half, and the Magic took advantage. As Orlando's defense tightened up, the Nuggets had trouble getting the shots they wanted, which led to even sloppier play. Credit the Nuggets for their effort on the boards; they snared enough of their own misses to keep the game close for a while, but once Turkoglu got into his third-quarter groove, they didn't stand a chance.

Denver played listlessly and without its star player--Carmelo Anthony has a broken hand--but Orlando's win in nonetheless impressive. It overcame a poor offensive night from Howard (14 points on 5-of-15 shooting, 3 turnovers) and a 2-point (1-of-11 from the field) performance from its bench to complete a 4-0 West-Coast road trip which included victories over each of that conference's division leaders. That's special.

The Magic won't play again until Thursday night, which is a bit of a bummer, but they've earned the rest. And they'll need it; their 7-game overall winning streak and their 11-game home winning streak will be on the line against the defending champion Boston Celtics in a nationally televised game.

After the jump, a quick look at how Billups' and Nelson's stats for this game compare.