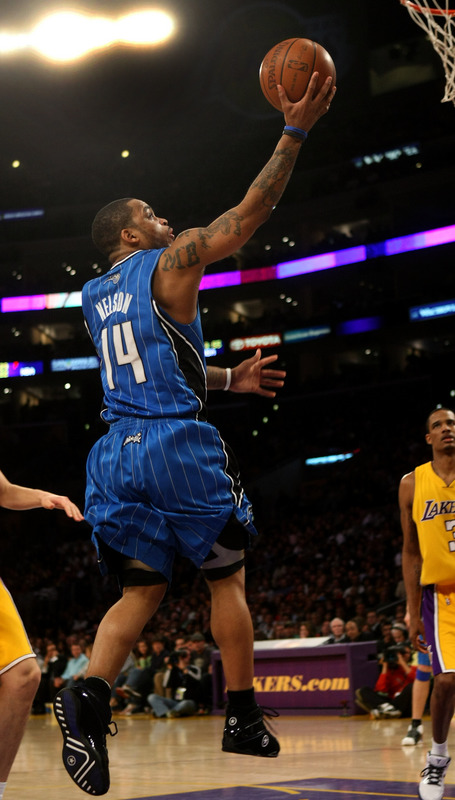 The Orlando Magic came back from an 8-point halftime deficit to upend the Los Angeles Lakers at home, 109-103, behind a furious second-half surge. The Lakers battled back in the fourth, and the teams exchanged leads for much of the final period before Orlando's Jameer Nelson put the game away. Nelson scored 15 points (on 4-of-5 shooting) of his game-high-tying 28 in the final frame, including three crucial three-pointers, to secure the victory. He added 6 rebounds and 8 assists. His teammate in the middle, Dwight Howard, scored 25 points and pulled down 20 rebounds for his fourth 20-20 game of the season. For the Lakers, Kobe Bryant recorded his 15th career triple-double wth 28 points, 13 rebounds, and 11 assists, but he missed 9 of his 12 shots in the fourth quarter as the Lakers struggled to find their way offensively.

You'll forgive me if I forego the traditional analysis for a bit and say...

I can't believe the improvement he's made this year. Cannot believe it. Nelson, as I described in the opening paragraph, was nails in the final period. All three of his three-pointers were of the go-ahead variety. That's how he did it late. Earlier in the game, though, he was more aggressive taking the ball to the basket, especially in transition. Some people may believe that Nelson will come back down to earth when he loses his three-point touch, but that's not true as long as he keeps getting to the rim and converting. He didn't let having two of his shots swatted by Andrew Bynum deter him from going inside, either. Did I mention his 6 rebounds and 8 assists? And his savvily drawing a three-shot foul on the veteran Derek Fisher early in the third quarter, helping the Magic make their run?

It's rare for anyone's performance to overshadow Dwight Howard's when he posts a 20-20 game, but Nelson's sure did. Then again, Howard shot only 8-of-18 from the field--let's give Andrew Bynum some credit from forcing Howard to fade on some of his hook shots, rather than letting him go straight up--and committed 6 turnovers. Some of those turnovers were of the mind-blowing variety. Yes, Dwight, it's a great idea to throw a bounce pass in traffic to a teammate who isn't looking for the ball. Yes, Dwight, it's a great idea to throw an outlet pass to a teammate falling out of bounds rather than to the teammate standing wide-open right next to you.

Enough with the hate, though. Dwight did his thing, which made up for Rashard Lewis' and Hedo Turkoglu's relative invisibility (16 and 13 points, respectively). Tony Battie, too, gave the Magic a lift from the center position. Battie grabbed 6 rebounds in 16 minutes, and added 8 points, a few of them on monstrous dunks in traffic that looked like something from one of his college highlight films; recall that he was the 5th overall selection in the 1997 draft.

I'm not sure if there's enough we can say about how well the Magic fought for this win tonight. They almost gave it away late by leaving points at the foul line, turning the ball over, letting the Lakers out-hustle them for loose balls, but ultimately it was Nelson's clutch marksmanship and overall solid halfcourt defense in the second half that earned them the win. Coach Stan Van Gundy deserves a lot of credit for making the proper adjustments at halftime, and his players deserve credit for executing the gameplan in the second half. Again, this was a tremendous win. The Magic swept the season-series with the Lakers for the first time in franchise history, just five days after doing the same thing to the Spurs. This is a special team, folks.