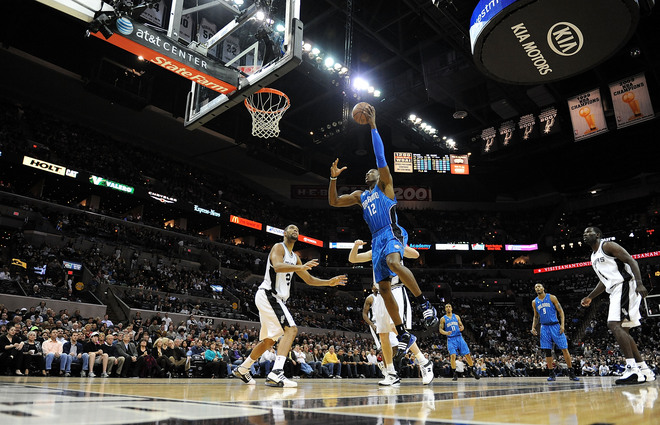 The Orlando Magic's 105-98 win over the San Antonio Spurs--which gave the Magic just their 13th win in 41 tries against that franchise, and the season-series-sweep for the first time in franchise history--qualifies as a "statement game." What isn't exactly clear is what the statement is, necessarily. The Magic let Spurs guard Tony Parker get to the basket at will, lost the rebounding battle, and generally did not play the same stout defense to which we've come accustomed to seeing this year. None of it mattered, because the Magic executed their offense nearly to perfection, and drilled an unreal 14 of their 22 three-pointers. Not many of the shots were contested, either, much to the chagrin of Spurs coach Gregg Popovich. The Spurs decided to double-team Dwight Howard on occasion, and Dwight usually found a way out of it; all 3 of his assists lead to three-point baskets, one apiece from Hedo Turkoglu, J.J. Redick, and Keith Bogans.

What's especially encouraging for the Magic is how three of their stars--Howard, Turkoglu, and Jameer Nelson--carried them for different stretches of the game. Howard started and ended strong, with 7 points in the first and final periods, and finished with a game-high 24 overall. Turkoglu scored 12 of the Magic's 19 third-quarter points, buoying them while the Spurs made one of their runs. And Jameer Nelson, who did not shoot especially well overall (7-of-18), scored 12 of his 22 points in the fourth quarter to put San Antonio away. This team just has no fear.

Of course, the Magic would have come up well short in this game had they not been so hot from beyond the arc. Then again, the Spurs gave them some open looks, so give the Magic credit for taking advantage. Defeating a streaking, elite team on the road is always a tough task. And the Orlando Magic are almost always up to it.