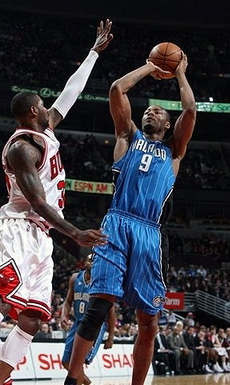 Rashard Lewis of the Orlando Magic shoots over Larry Hughes of the Chicago Bulls during the Magic's 113-94 victory over the Bulls.

In another dominant, all-around performance, the Orlando Magic downed the undermanned Chicago Bulls in a New Year's Eve matinee, 113-94. Rashard Lewis led Orlando with 21 points in 31 minutes. Hedo Turkoglu added 18 points, 9 rebounds, and 4 assists, while Dwight Howard had 15 points and 14 rebounds in only 29 minutes. Orlando never trailed in the game, which allowed coach Stan Van Gundy to rest his starters for much of the second half.

The final score makes the game appear closer than it was. The Bulls caught fire in the fourth period, which they entered trailing by 28 points, but the Magic held them in check when it mattered. With no healthy, credible frontcourt scorers--starting center Drew Gooden and forward Luol Deng missed the game due to injury--Chicago had to rely on its backcourt of Derrick Rose and Ben Gordon to carry the offensive load. Gordon is never a reluctant shooter, and Rose can set aside his playmaking duties to look for his own shot. Last night, it didn't work. Orlando's perimeter defense was solid, forcing Gordon to hoist more off-balance 18-footers than he usually takes, and when it wasn't, Dwight Howard was there to either block or alter the shot at the rim. Even when the Bulls managed to get a shot off, Howard (9 defensive rebounds) or Turkoglu (8) was there for the carom. Two nights after watching his team plod at Detroit's 81-possession pace, Van Gundy implored it to run early and often, and it responded. Turkoglu was brilliant in transition. Even when the Magic couldn't get an uncontested shot in transition, they were at least able to find a mismatch and exploit it. Rashard Lewis unleashed his underrated post-up game, but also mixed in his usual three-point bombs. It was an astounding offensive performance by all Magic players.

How good were the Magic tonight? Despite letting off the gas in the fourth quarter, their offensive efficiency was still 120.2. J.J. Redick played the best 20 minutes of basketball he's played in weeks. Anthony Johnson made two three-pointers for just the second time all season. Marcin Gortat had his way with both Aaron Gray and Joakim Noah. The list goes on, but I can't. With spotty internet connectivity today (you may have seen my distraught Tweet earlier) I can't afford to type much more and risk not being able to post it. Anyway, the Magic now sit pretty at 25-7, only 1.5 games back of Cleveland for the second-best record in the East, and 2.5 games back of Boston. It's a great thing they took care of business against Chicago, too, since their schedule will tighten up later this month. Take a look.

I hope you enjoyed the New Year. Here's to 365 more days of great Orlando Magic basketball.