Share All sharing options for: Patrick Ewing is the Orlando Magic's First Hall-of-Famer 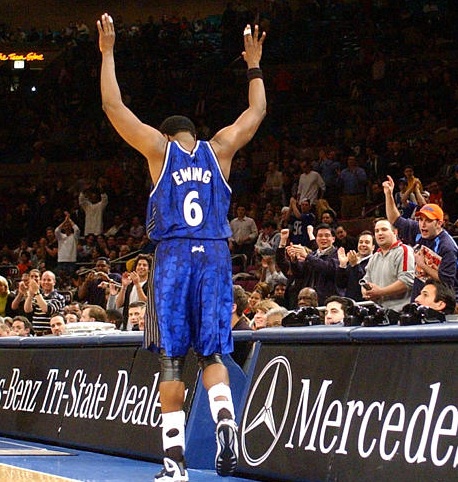 Receiving a wild ovation, Magic center Patrick Ewing heads to the scorer's table during the final minute of what turned out to be his last appearance as a player in Madison Square Garden, the arena in which he played hundreds of games as a New York Knick.

In a gross oversight, I never mentioned Patrick Ewing's induction to the Basketball Hall of Fame last Friday. Ewing became the first former Magic player ever inducted, although that fact will probably elicit no more than a shrug from most Magic fans; it is, to borrow a phrase from a Raptors blogger, "the ultimate technicality." After all, Ewing played only the final season of his career with the Magic, and did so in a reserve role. He averaged 6 points and 4 rebounds per game. Modest totals, to be sure, but respectable given that he only played 13.9 minutes per game.