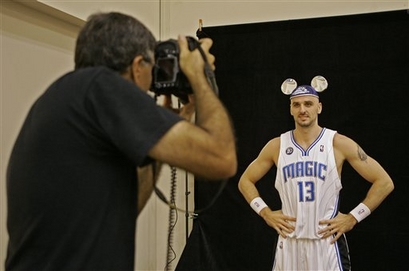 WARNING: this post is largely an excuse to post a picture of Marcin Gortat in Mickey Mouse ears. We promise to have something more substantial soon.

No substantive reports from Orlando Magic Media Day -- which I would have killed to attend -- yet, but I'll keep my eyes open. In the meantime, you can see that Marc Stein of ESPN ranks the Magic 14th (?!) in his preseason rankings, down from 11th at the end of last season. Among the teams in front of Orlando are Philadelphia, Toronto, Dallas, Phoenix, and Portland.

It's not super negative, though. In his appraisal of Philadelphia, which he rates 8th, Stein says that Cleveland, Detroit, Toronto, Orlando, and Philadelphia could all finish between second and sixth in the East. The Magic are the only Southeast Division team in that group, and a divisional title guarantees a top-four playoff seed, regardless of record.

So hooray for technicalities, then.