An Orlando Sentinel photo gallery contained this control art for the Orlando Magic's new uniforms for the 2008-2009 NBA season. The pictures presumably come from the Orlando Magic organization, although no byline was given. 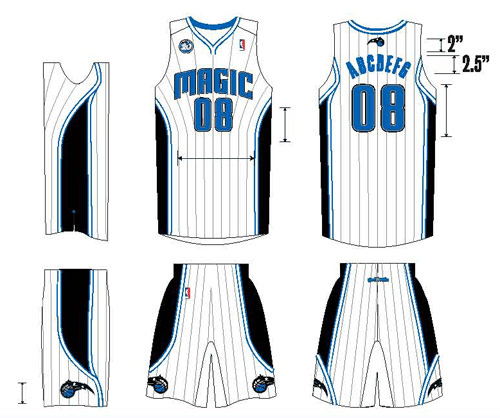 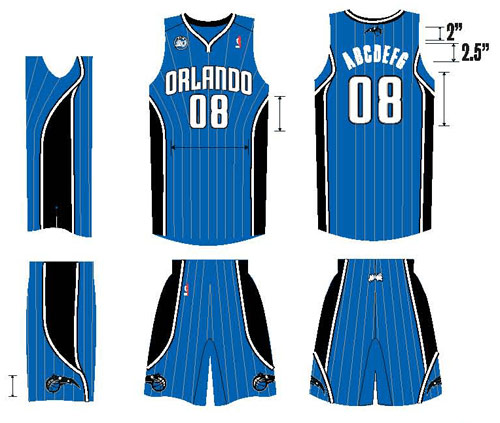 As with anything relating to art, my opinion is pretty subjective, and different people have different opinions as to what makes a great uniform. With that in mind, I'll outline my feelings about the uniform after the jump.

I think both sets are gorgeous and a major upgrade over the previous look, which was attractive, yet bland. What makes this set so great? Namely, it's instantly identifiable with the Orlando Magic. Look at the control art for the home uniform at the top of this post. Now, in your mind's eye, remove all the Magic logos, wordmarks, etc. You're left with a white basketball uniform with black-and-blue trim, as well as silver pinstripes. There's no mistaking it for a Magic uniform, based on the team's history.

Let me explain. The new uniforms recall, then tweak, elements from the team's previous looks, while remaining cohesive:

It's hard to find things to criticize, but I'll go ahead and try:

There is one detail of the new uniforms to which some purist observers may object, but to which I do not:

There's also another potential problem with the Magic's uniforms, but it's nothing that didn't exist before, and it's nothing that the team can help without undoing 20 years' worth of marketing: they're blue. By my count, 17 of the league's 30 teams have a blue uniform in their wardrobe, be it away or alternate. That total includes the Charlotte Bobcats' bizarre greyish blue alternates and the Oklahoma City Thunder's rumored away uniforms, but does not include the Los Angeles Lakers' purple road uniforms, which the organization refers to as "Forum Blue."

Only five hours have past since the unveiling, but I still feel comfortable in saying the new uniform is the best the team's ever had, narrowly edging out the "dazzle" uniforms with sublimated stars.

Allow me to eat my words from March, when news of a uniform change first broke:

The whole thing smacks of greed -- Are you ready to break the bank for new jerseys and t-shirts? -- and I don't like it one bit.

But that's enough from me. What do you think? Let's hear it in the comments.