Off-Day Open Thread: Discussing the Teams That Might Outdo the Orlando Magic Next Season

Share All sharing options for: Off-Day Open Thread: Discussing the Teams That Might Outdo the Orlando Magic Next Season 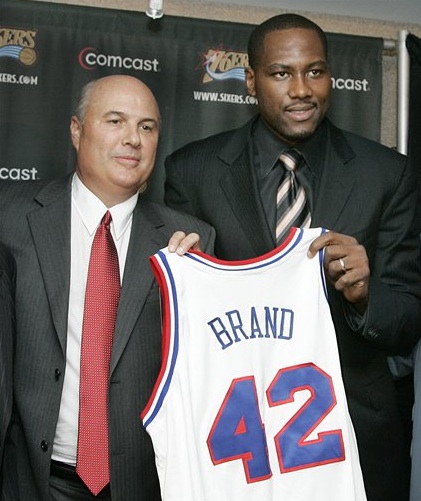 The Philadelphia 76ers' addition of Elton Brand has some NBA experts picking them to make it to the NBA Finals.

If you're interested in NBA predictions made in early September, then ESPN has you covered. 25 of its NBA experts huddled and predicted the 2008/2009 standings, year-end-awards, conference champions, and NBA champions. What I'm most interested in is the Eastern Conference predictions: 17 of ESPN's experts picked the Boston Celtics to come out of the East once again; 6 of them picked the Cleveland Cavaliers to make it to the Finals for the second time in three years; and 2 of them picked the re-Branded Philadelphia 76er team to advance.

And yet what strikes me the most is the support for Philadelphia. There's no doubt that they were the surprise team of the East last year, finishing with a 40-42 record and playing fantastic ball after the All-Star break. There's also no doubt that the addition of Elton Brand will improve them tremendously, possibly into 50-win territory. In fact, Sixersoul points to the Magic's acquisition of Rashard Lewis last summer, which pushed them from 40 wins in the previous season to 52 in the subsequent one, as proof that the 76ers are poised to make a tremendous leap.

However, not everyone agrees with that assessment. Clipper Steve of Clips Nation, who's as familiar with Brand's game as anyone, is one of the skeptics. He describes at length why he thinks the 76ers are overhyped. Their "Big Three" of Brand, Andre Iguodala, and Samuel Dalembert is weak in comparison to other trios in the East, and they lack a guy who can deliver in the clutch.

So now, sparked by Steve's discussion of the 76ers, I pose this question: which moving-and-shaking Eastern team is most likely to leapfrog Orlando, which finished behind only Boston and Detroit last season, in the standings next season? Here are the choices, in no particular order: