The Orlando Magic will introduce their new uniforms on September 23rd, if you believe this teaser image posted on the team's official online store: 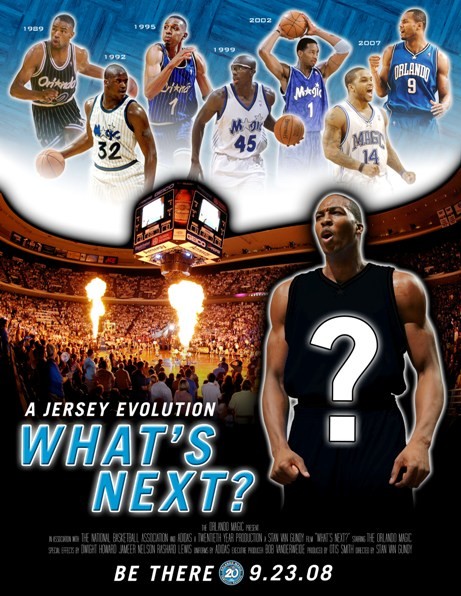 Is that when the team will reveal the new uniforms? Is that when they go on-sale? Both? Neither? The image doesn't tell us much, other than to circle September 23rd on our calendars... because something will happen. Hooray! Nebulousness!

Don't read at all into the fact that Dwight Howard is "blacked out" in the teaser image. As we saw in the Getty Images rookie photo leak two weeks ago, the Magic's new uniforms are blue, not black. League rules dictate that teams must wait two years to introduce an alternate uniform after a uniform change, which means the soonest we'll see the team in black is 2010. Bummer, I know.

Speaking of bummers and Dwight Howard, he did not fare so well against Greece yesterday. Hampered by foul trouble, he played just 12 minutes and watched his backup, Chris Bosh, steal the spotlight yet again with a game-high-tying 18 points. I'm not worried, though. Bosh's finesse and keen defensive instincts make him a better fit for international competition than Dwight, which is fine. Dwight could average 0 points and 5 fouls per game and I wouldn't care as long as the United States won the gold medal. I just hate to see Dwight's confidence shaken. And he is playing with that sullen look Magic fans have come to fear. I hope he regains his focus, and soon. Spain, the next-most talented team in the tournament, awaits this Saturday at 8 AM. He'll have the chance to pay Pau Gasol back for all the flopping he did in February.