Have People Soured on Dwight Howard?

Share All sharing options for: Have People Soured on Dwight Howard? 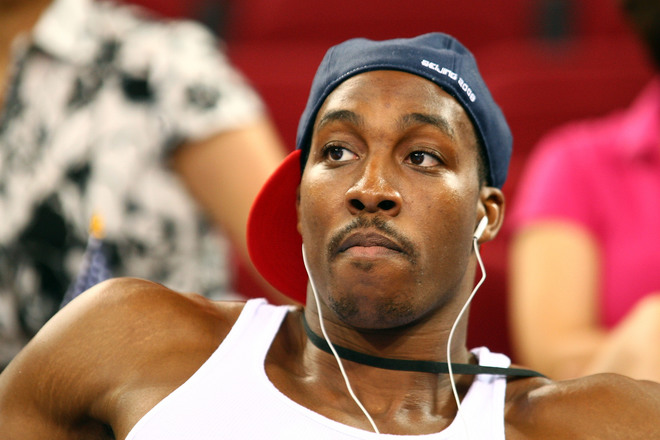 I get the impression that some people have soured on Dwight Howard.

Perhaps not as a player -- he's coming off his best professional season, one in which he lead the league in rebounding and his team in scoring; earned First-Team All-NBA honors; and propelled the Magic to their first second-round playoff appearance in a dozen years -- but maybe as a personality.

I like keep up with stuff in the blogosphere. I like to think I have a decent handle on what non-Magic fans think about Orlando's players, and especially Howard. And in my year-plus of covering the Magic extensively, I haven't read more than one or two posts from people saying deriding Howard's personality, or at least questioning it.

Dwight got off to a great start in Team U.S.A.'s first game in round-robin play this morning (boxscore | New York Times recap), going 4-for-4 from the field, all on dunks; I didn't tape the game, so I can't verify this assertion, but I don't recall him celebrating or goofing off after any play. About the only negative body language from Howard occurred after 6'09" guard Sun Yue rejected one of his layups. Dwight sagged his shoulders a bit and played below-average for the rest of the game, which shouldn't surprise Magic fans, who are used to Dwight losing focus when flustered. Disconcerting, to be sure, but not out of the ordinary.

Have you all noticed a change in Dwight's attitude? Should we be worried about it heading into next season, in the first year his maximum-level contract extension?

UPDATE: I'm a bit late to the party, but I feel like I should mention that Natalie from Need4Sheed clarified what she meant with her original post. From the comments of this entry:

I really wasn’t upset at Dwight or Bozzer for that matter, be it that they were ugly or it was too hot everyone else didn’t seem to have a problem with them. I just though it may have been a bit disrespectful. Can’t say that I have soured on Dwight, he’s still one of my favorite players.

Yeah, looks like I reached when I originally wrote this post. 3QC commenter magic fanatic might have said it best: "All this means to me is that he is officially a superstar."