Mickael "Air France" Pietrus Ready to Land in Orlando; Redick Likely on His Way Out (Or So We Think)

Share All sharing options for: Mickael "Air France" Pietrus Ready to Land in Orlando; Redick Likely on His Way Out (Or So We Think) 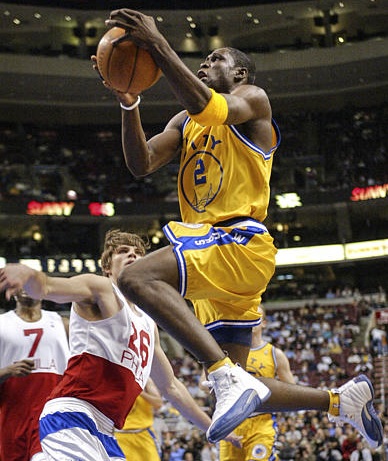 Mickael "Air France" Pietrus, seen here taking flight over Kyle Korver, has agreed to terms with the Orlando Magic on a multi-year deal.

Earlier today, I discussed with another blogger how the Magic's inactivity this summer made me nervous. The moves some of the teams behind them have made -- the Wizards' re-signing their two big-name free agents, the Heat's adding the draft's most talented player, the Raptors' acquiring a dominant low-post defender, to name a few -- coupled with the Magic's not making a peep in free agency just made me... uneasy. I didn't like that we were just sitting back, watching other teams make moves to get better.

The Magic got proactive today by agreeing to sign swingman Mickael Pietrus, which is curious, because he doesn't address either of the Magic's biggest needs: depth at point guard and at the power positions. He lacks the ballhandling and decision-making skills to play point-forward, and although Pietrus, 6'07", played power forward in Don Nelson's nutty, anything-goes offense in Golden State, can't play that spot in Orlando, not with Brian Cook (6'09"), Rashard Lewis, and James Augustine (both 6'10") in front of him.

But, despite not addressing Needs 1 and 1-A, Pietrus makes sense for the Magic. He's an upgrade over their incumbent starter, Keith Bogans, and he should make an immediate impact. The signing also means J.J. Redick is likely on his way out. Already the Magic's best trade asset, he now projects to sit at the back end of Orlando's still sub-par backcourt rotation. He, combined with a future draft pick or two, should net the Magic a solid player at either point guard or power forward. The Magic will look to bolster Whichever position the nigh-inevitable Redick trade doesn't address through free agency with the low-level exception. Of course, they wouldn't have to trade Redick if they drafted a power forward in the first place...

A final note about Pietrus: he's coming off a season in which he regressed. His per-36-minute scoring decreased (14.9-12.9), as did his effective field goal percentage (56.7-52.5). Maybe it's wishful thinking on my part, but I believe Pietrus' problem was focus-related. Getting away from Nelson, with whom he had a sour relationship, might do wonders for his confidence and performance.