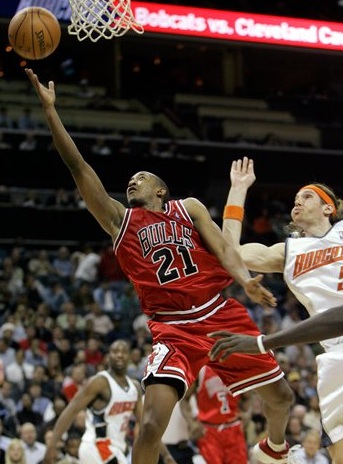 Tim Povtak and Brian Schmitz report the Orlando Magic will offer free-agent point guard Chris Duhon a three-year deal worth around $10 million. Duhon could decide by the end of the week if he will accept the offer, and his agent, Kevin Bradbury, says he wants his client to work quickly to make a decision.

As Povtak and Schmitz note, signing Duhon would end any possibility of the Magic signing free-agent swingman Corey Maggette, who's drawn interest from nearly every NBA team.

It's unclear whether Duhon will accept the Magic's offer, having received a two-year, $7 million offer from the New York Knicks just yesterday (link found via Posting and Toasting). Orlando's proposal gives him a lower average salary, but an extra year of job-security. It also gives him the opportunity to play for a contending team.

UPDATE: Thanks to 3QC reader travelerkt for pointing out the Magic have Keyon Dooling's Larry Bird Rights, and can thus exceed the salary cap to sign him. Keep that information in mind when reading the rest of this post, which I've amended with strikethroughs when appropriate.

What I'm more interested in knowing is how Duhon's potential signing affects the status of the Magic's incumbent backup point guard/best perimeter defender/sixth-man, Keyon Dooling, also a free agent. It's doubtful the Magic could retain his services, as Duhon's salary ($3.3 million, which is more than half the mid-level exception) leaves just $2.5 million for Orlando to use to keep Dooling, who earned $3.5 million last season and who now seeks a raise. It could mean Orlando could re-sign shooting guard Maurice Evans, who earned $1.5 million as a starter last season.

I'm disappointed by Orlando's offer to Duhon; although he's an above-average defender, he's also an offensive liability who struggles to his 40% of his shots. Opposing defenses will leave him open to double-team Dwight Howard. Although Dooling was not a great outside shooter either, he at least got to the basket and created offense for himself. I'll liken him to other recent Magic backup point guards in this way: he combines Dooling's defense with Carlos Arroyo's passing ability and Jacque Vaughn's "marksmanship." He's certainly not worth $10 million over three years, nor is he worth losing any hope of signing Maggette or Dooling, who are is a far superior players.

Once again, Magic management baffles me with its decision-making. Even with Jameer Nelson's relatively steady play, and with Dooling's career-best season, the Magic had one of the worst overall backcourts in the league. It just got appreciably worse.