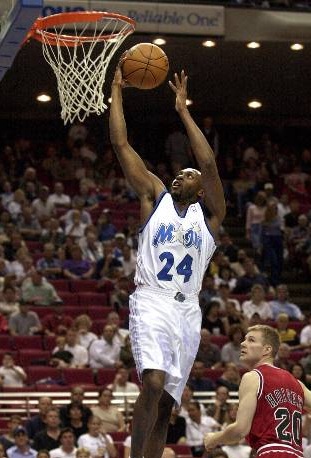 The Orlando Magic reached an agreement to sign free-agent guard Anthony Johnson, who played for them during the 1999/2000 season, as seen above.

The Orlando Magic signed veteran point guard Anthony Johnson to a two-year deal. Denton and Schmitz have the scoop. Schmitz also says that the team expects backup center Adonal Foyle to return, although he will probably not sign for another month. The 2008/09 roster is indeed taking shape, and there could be another deal in the works, as the Magic are still trying to acquire point guard Javaris Crittenton from the Memphis Grizzlies.

Only that last bit of news excites me. Johnson will turn 34 before the season starts and is, at best, a third-string point guard on a contending team. The Magic need to find a younger, taller option to lead the second unit. And as much as we all admire Foyle's hustle and character, he's too much of an offensive liability to effectively back-up Dwight Howard.

Based on today's news, I expect next season's depth chart to resemble the following (inactive players in italics):

The roster is loaded with bigs, so I expect the team to jettison at least one of them (Cook?) before the season starts. So far, this roster isn't a huge improvement over last year's, which won 52 games and a division title, so maybe we shouldn't complain.