Share All sharing options for: The Orlando Magic's Lucky Draftee Gets to Wear an Ugly Hat in Photographs

What we don't know is whom the Magic will draft. What we do know is the hat they'll wear onstage after they're selected will be hideous: 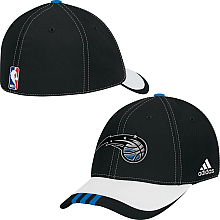 It seems like each year, the league's draft-hat template gets uglier and uglier; here's last year's piped-to-death monstrosity. I'm not sure where to start with this year's Magic version. The contrast stitching on the panels needs to go. The contrasting brim (complete with black trim and blue stripes!) needs to go. The adidas logo on the left side needs to go. The alternate trailing basketball logo needs to be switched with the team's main logo. And here's my biggest gripe of all:

The hat isn't even freaking blue!

Yes, adidas made the Magic's draft hat black despite these two key facts:

Yeah, adidas didn't get the memo. Hopefully, it isn't in charge of designing the Magic's new uniforms which will debut next season. If it is, we might end up dressing as poorly as Charlotte. Look at all those garish panels. Ugh.