Share All sharing options for: The Forecast Calls for Karmic Retribution and a 3-1 Series Deficit

When the Magic beat the Pistons in Game Three, Brendan of the blog Believing in Magic called it "karma." Fair enough. But if the Pistons come out and eat our lunches tomorrow afternoon, we can blame karma for that, too.

Before Game Three, the Orlando Sentinel posted these Rasheed Wallace mask cutouts on its website. I feared the worst, believing that 'Sheed would feed off the crowd's negative energy and have a monster game. He did the exact opposite and finished with 11 points on 4-of-15 shooting, and he took some terrible shots that killed the Pistons' momentum when they were clawing back into the game. So we dodged that bullet, so to speak.

But this flash animation on the Sentinel's site... oh, man. That's bad news. When I first saw it, I laughed a little bit. Actually, I laughed a lot. C'mon, it's funny: click on Rasheed once, and he starts crying. Click again, and a pacifier pops into his mouth and he shuts up. 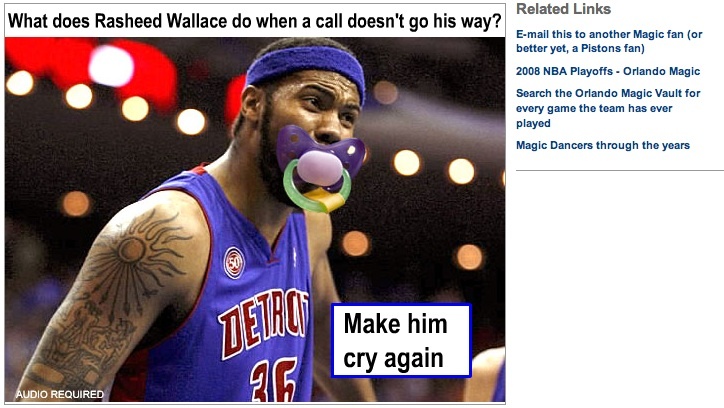 But then I thought about it some more: the Sentinel is Orlando's go-to newspaper. It's where out-of-towners are going to look for Magic perspective. And when it does amateurish, unprofessional stuff like that, it does more than damage its reputation: it damages the city's reputation.

That's something for which I cannot stand.

Even during the Shaq-and-Penny glory days, we had a reputation as living in a Mickey Mouse town. In a literal sense, that much is true: the Disney World theme parks put us on the map, and -- duh -- they're still here. Nevermind the fact that no Orlando resident I know visits Disney more than once every few years. To out-of-towners, though, it appears as though we're little more than a town of cloying sports neophytes and mouse-ear-wearing idiots. The fact that Disney sponsors some Magic games hurts our cause. Oh, and the team's name itself -- Magic -- evokes the Magic Kingdom theme park. Wonderful.

To combat that reputation, we need to show that we know what we're talking about when it comes to sports. I'm trying to do my part, but I'm not delusional. I am not influential. The Sentinel is. And, as a professional, mainstream-media establishment, it should have more respect for itself and its readers than to post silly flash animations like that. If the Sentinel's editors want to have some fun, that's fine. But they should do so tastefully, lest they swing karma back in the Pistons' favor.