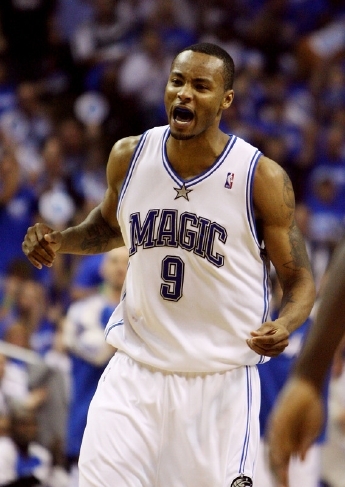 Rashard Lewis celebrates after drilling one of his five three-pointers in the Orlando Magic's 111-86 rout of the Detroit Pistons. Lewis scored a career playoff-high 33 points.

The Orlando Magic came out blazing against the Detroit Pistons tonight, jumping out to an early 24-8 lead in the first quarter, and staved off a third-quarter run by the Pistons to clean their clock pummel them by a 25-point margin, 111-86.

First, I have to encourage us to curb our enthusiasm: it's only one game. When some Pistons fans left my section late in the fourth quarter, Magic fans taunted them unmercifully, but one Piston fan held up two fingers on one hand and one on the other to symbolize the Pistons still have a 2-1 lead in the series. Further, Detroit was without its best player for all but the first 3 minutes of the game, as Chauncey Billups left with a strained hamstring and did not return. Last, this Pistons team has a poor record in Game Threes, as Orlando Sentinel writer David Whitley mentioned after the game.

The Pistons still got 19 points from Billups' backup, Rodney Stuckey, and got 24 points from their best scoring threat, Richard Hamilton. When Stuckey left after acquiring his second foul, Tayshaun Prince ran the offense well as a point forward and the Pistons played the Magic essentially evenly, outscoring them 16-15 until Stuckey checked back in to run the point. Most importantly, Billups would not have changed the Pistons defense -- or lack thereof -- on Rashard Lewis, who saved his best offensive night for the Magic's most important game of the season. Lewis was simply unstoppable, scoring 33 points on 15 shots (!), taking only what the defense gave him and not forcing the issue. Stan Van Gundy called plenty of isolation plays for him, more than any other game this season, and Lewis converted with a variety of drives. He also had the signature shot of the game to start the fourth quarter. Matched up at the top of the key with Rasheed Wallace, a great defender, right in his face, Lewis jab-stepped a few times, faked, fired, and drilled a three to give the Magic a 76-69 lead. That shot, moreso than the three-pointer Keyon Dooling hit just moments later, sealed the game as a win for us, at least as far as I'm concerned.

But the Dooling three was pretty tremendous. The circumstances around it are as follows: a Dwight Howard missed free throw caromed out long to the right wing. Stuckey grabbed the rebound on the sideline before losing his balance and falling out-of-bounds right in front of Detroit's bench. Initially, official Joe DeRosa signaled for the Magic to get possession. But after Pistons coach Flip Saunders said a few words to him, DeRosa changed the call to a foul on Hedo Turkoglu. On the ensuing (and wrongfully awarded) possession, Rasheed Wallace missed a long two-pointer. The Magic got the rebound and pushed the ball ahead to Dooling, who hit the shot to give the Magic an 80-69 lead.

Another word on Wallace: he was not at his best tonight. He got in foul trouble, jawed with the refs, and the Amway Arena crowd rewarded him with the most vociferous booing it's given any other opponent this season, louder than even the one it gave former Magic players Shaquille O'Neal and Grant Hill in their returns with new teams.

But as big as Lewis was, the difference in the game was Dwight Howard. He had "only" 12 rebounds, but dominated defensively and proved to be, as one in-arena sign termed it, "Pystonite." His six swatted shots discouraged further Pistons penetration, forcing them to take midrange shots, some of which they still managed to convert. Still, I'd rather Detroit score two points via a contested jumper than via a layup, so I can live with those makes.

So, which team should we favor to win Game Four? I'm undecided. On the one hand, our offense has improved in each game and the Pistons might be without Billups, who won't be at 100% even if he does play. On the other hand, this thumping may have woken the Pistons up, and they could come out looking for blood Saturday and effectively end the series with a win. Additionally, as Brian from Empty the Bench points out, the Pistons made a game of it late in the third quarter even with all the odds (no Billups, foul trouble for Wallace, no offense from Jason Maxiell) stacked against them:

And, still, the Pistons whittled the Magic's lead down to just 3 points by the end of the 3rd quarter. Orlando rattled off a 9-0 run to the start the 4th, however, and the Pistons never recovered

Anyway, let's savor this win as best we can tonight... and savor our free donut tomorrow morning.