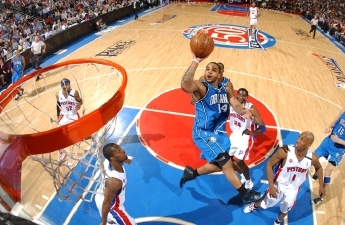 The Magic's Jameer Nelson tied for the team lead in scoring with 22 points, but it didn't matter, as Orlando fell to Detroit, 100-93, facing a 2-0 series deficit in its best-of-seven Eastern Conference Semifinals matchup.

Let's get one thing out of the way: the Magic did not lose tonight's game because of the three-point basket that the Pistons were erroneously awarded at the end of the third quarter. Odenized (who else?) has the video of the whole bizarre sequence at YouTube:

As you can see, the game-clock malfunctioned, and only three-tenths of a section went off the clock despite the Pistons inbounding the ball, taking three dribbles, passing, taking another dribble, then passing again to Chauncey Billups for the shot.

That basket gave the Pistons a 78-76 lead heading into the fourth quarter. The Magic had 12 minutes to overcome a two-point deficit. Yes, they should have started the quarter with a one-point lead, but there's no way to guarantee that it would have made any difference. A lot can happen in 12 minutes of basketball, so let's not waste our time complaining about an error the officials were not even allowed to fix, given the current replay rules, and instead use in constructively on figuring out why we lost.

First, we turned the ball over entirely too much (19 turnovers on 87 possessions), forcing the issue early in the game and down the stretch. Rashard Lewis, Hedo Turkoglu, and Dwight Howard combined for 17 of those turnovers, although we can attribute most of Dwight's miscues to soreness in his left thumb, which made it hard for him to hang onto passes. Our gameplan seemed to be "get the ball to Dwight!" and, although it worked well when executed, both Lewis and Turkoglu were guilty of telegraphing their entry passes, which the Pistons easily deflected or stole. Turkoglu in particular had a horrible offensive game. His rushed three-point jumper -- there were 21 seconds on the shot clock. Turk! -- with the Magic down 2 points and 48 seconds to play doomed us. It's bad enough he shot it just 3 seconds into the possession. What makes it worse is the fact that he did not set his feet OR follow through. Our greatest fears have come true: Hedo, our greatest fourth-quarter player, has developed a hero complex.

This shot was eerily similar to the fadeaway three for which he settled at the buzzer of the Magic's 103-102 loss to the Timberwolves in mid-April. After that game, Magic coach Stan Van Gundy said, "I didn't like the shot because he wasn't set." Well, I hope Hedo hears it from Stan and from the media after tonight's game: that rushed shot, more than anything else we did offensively, doomed us.

There's also the matter of defense. We held Richard Hamilton to 14 points on 4-of-18 shooting, but we had no answer for Detroit's other three big guns: Billups, Tayshaun Prince, and Rasheed Wallace combined for 62 points on 23-of-42 shooting. Now, Billups' total -- 28 -- is a bit nflated due to the fouling we did late in the game when it got out of hand, and Jameer Nelson was no slouch offensively with 22 points of his own. Still, when Wallace and Prince create mismatches like that, Detroit is tough to beat. We simply don't have an answer for those two players. Prince is too quick for Turkoglu to guard, yet too tall for Maurice Evans to guard. Similarly, Wallace has too much range for Dwight to handle, yet too good a post game for Rashard to handle. And that, in a nutshell, is how the Pistons have stayed on top of the East for so long: they have four guys who can beat tyou, by themselves, on any given night.

But let's give ourselves some credit for fighting back from a fourteen-point deficit against a superior team on its home floor. Let's also credit the Pistons, for clamping down on defense when it mattered most: we scored 17 points on 25 fourth-quarter possessions for an offensive rating of 68.0.

Let me recognize some strong efforts from our guys before I wrap this thing up: Jameer's 22 points were fantastic, and tonight was his best game against Detroit by far in his career. People may point to Billups' gaudy 28 points, but that doesn't tell the whole story. Jameer took, and made, some big shots of his own, and his five three-pointers are the only reason we were in the game in the second half anyway. And Dwight Howard, with 22 points and 18 rebounds, was tremendous. He fared well against each Piston who defended him, even throwing down a furious two-handed slam in the face of that #42 fellow on the Pistons, the one whose name escapes me. 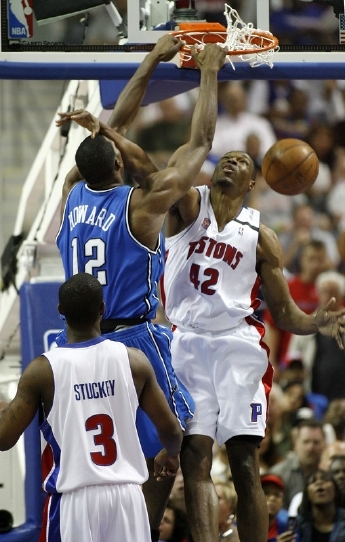 Dwight did a lot of the dirty work tonight and recovered nicely from his poor Game One effort.

I don't know the exact statistic, but if memory serves, when the team with home-court advantage in a seven-game series wins its first two games, it goes on to win the series 94% of the time. But I'm not counting us out quite yet. Turnovers and boneheaded shot-selection aside, we still played a heckuva game tonight, and as I said in the Hoops Addict podcast I did last night, there's no shame in losing to a better team, especially when you put up a fight, which we did tonight.

For more on tonight's game, check out Matt Watson's pregame interview with Rashard Lewis. Also check out this unscientific poll at OrlandoSentinel.com, in which 76% of respondents blame poor officiating for the Magic's loss tonight, at least at the time of this post.