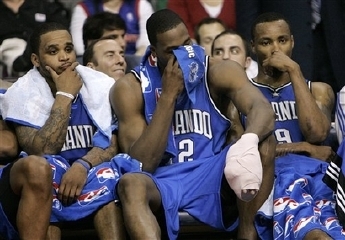 Jameer Nelson, Dwight Howard, and Rashard Lewis watch their Orlando Magic lose to the Detroit Pistons, 91-72, in Game One of their Eastern Conference Semifinals series.

I don't think Hedo should have dunked that one.

Hedo Turkoglu gave the Magic their first and only lead of the game last night with a driving dunk early in the third quarter. It was all downhill from there, as the Pistons went on a backbreaking 19-3 run to put the game on ice. It's a shame, too because we sure played well in the first half.

Give a lot of credit to the Pistons. They took away our three-point and our driving lanes to the basket. Our offense is predicated on the drive-and-kick to open three-point shooters. When there's no drive, there's no kick, and there's no shot. The Pistons held us to just 15 three-point attempts, 10 below our season average. Even worse, we made just 2 of them. We had made at least 5 in every game this past season, an NBA record. We had to look to score in other ways, and couldn't get it done. It's a shame, too. We played great defense, holding Detroit to 91 points on 85 possessions, but it didn't matter because we simply couldn't put the ball in the basket. From anywhere: 47% from two-point range, 13% from three-point range, and 50% from the foul line.

Perhaps the only positive thing to come out of this game was Rashard Lewis' hard foul on Theo Ratliff. Here's the video, courtesy Need4Sheed. It was nice to see Lewis take a nice hack at Ratliff, even if it was out of frustration, because we need to try to dispel this notion tat we're soft. After the game, Ratliff did his best to downplay Lewis' toughness. Lewis countered by saying, "Tell (Ratliff) he can come out to the three-point line to guard me."

Game Two promises to be very telling: does this young Magic team have what it takes to rebound from an ugly loss and win a huge road game? Or will Detroit take care of business once more, forcing us to win four of the next five games to advance? I certainly hope it's the former, but given our history with the Pistons, I wouldn't bet on it.

Be sure to check out the recaps at Need4Sheed and at PistonsNationBlog. The GameThread for Monday night's game should be up at 5:30 AM, as usual. See you then.