Share All sharing options for: Talkin' Trades: J.J. Redick to the Pacers

Brent Beck, a die-hard Pacers fan, really wants Indiana to make a move for J.J. Redick, as he explains in a guest post at Indy Cornrows. Considering the Pacers a) are one of my favorite teams, b) Redick is one of my favorite players, and c) the Magic have no use for him, I heartily endorse the idea of sending Redick to Indy. But, as in any trade proposal, one must consider what the Pacers have to offer the Magic. And there's an obvious answer: 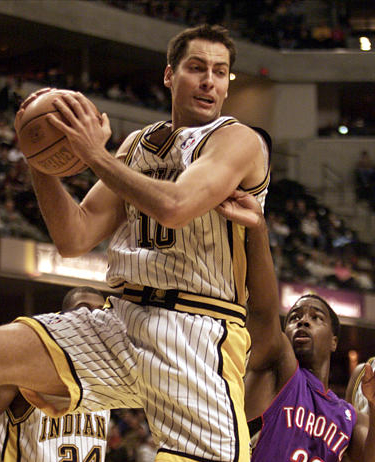 The Magic need help at power forward and center. Foster, a nine-year veteran with a career PER of 14.4, plays both positions. And unlike Brian Cook, the Magic's presumed backup four next season, Foster bangs around the boards with the best of them. And I really mean "the best": he lead the NBA in Offensive Rebounding Rate (the percentage of available offensive rebounds a player snags while on the floor) in each of the last two seasons. His career ORR, 15.31, is fifth-best in the history of the league and tops among active players, even more highly paid ones like Erick Dampier, Zydrunas Ilgauskas, and Ben Wallace. And, wouldn't you know it, the Magic's biggest weakness in their first season under Stan Van Gundy was their inability to clean up their own misses: although they were nigh-elite on the defensive boards, they were horrendous on the offensive ones, finishing 27th in the league in Offensive Rebounding Rate.

Foster's presence has a tremendous impact on the Pacers' rebounding abilities as a team. Data from 82games.com show that when he's on the floor, they grab 50.9% of available rebounds, a 4.7% improvement from their average when he's off the floor. Don't let the advertising quacks fool you. "Foster" is not "Australian for 'beer,'" but rather "San Antonian for 'Rebound.'"

As always, we must consider finances when discussing potential trades. Foster's $5.70 million salary next season more than double's Redick's ($2.14 million), but the Magic can throw in a player to make the trade work. Whom might they package? Look no further than Brian Cook. At 27, he's nearly four full years younger than Foster, and while he's certainly hit his ceiling, he fits in with Indiana's younger players (average age: 26.7) better than Foster did. Additionally, Cook's specialty, three-point shooting, will come in handy in Indiana. Only the Warriors and the Magic attempted more triples last season than the Pacers did, yet they finished eighth in three-point percentage. As a bonus for Indiana, his style contrasts nicely with Ike Diogu, the so-called "steal" in the trade that sent Stephen Jackson and Al Harrington to the Warriors, who plays more of a low-post game.

And if all those reasons didn't do it for you, maybe this one will. Foster's contract expires at the end of next season, giving the Magic cap room to re-sgn Hedo Turkoglu, who will almost certainly use his opt-out clause to negotiate a contract which would reward him for his exemplary play of late. Or, if Turk decides he would rather not stay with the Magic, or if the Magic decide Turk's asking price is too high, they can try to re-sign Foster.

When the Magic traded Trevor Ariza to the Lakers for Maurice Evans and Cook, ESPN's John Hollinger liked the deal because it was the sort of minor move that above-average teams make to take themselves to the next level. Obtaining Foster would be a similar, seemingly minor move for the Magic, but one that would pay even greater dividends. Every serious contender in the NBA gets contributions from role-players: Detroit has Antonio McDyess; San Antonio has Kurt Thomas; Boston has... well, it has three future Hall-of-Famers, so it doesn't count; and the Lakers have Derek Fisher. If the Magic want to make the most of the primes of their stars, they'd do well to acquire Foster (or another similar role-player) who may be slightly past his.