Orlando Magic News for May 20th: The Magic Want Keyon Dooling to Stay

Share All sharing options for: Orlando Magic News for May 20th: The Magic Want Keyon Dooling to Stay 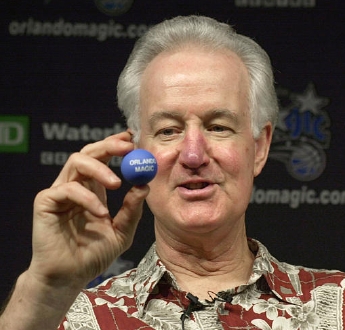 Pat Williams, the Senior Vice President of the Orlando Magic, talks to reporters five days before the 2004 NBA Draft Lottery.

Brian Schmitz has these two quick updates on this, the day of the NBA's Draft Lottery (8 PM, ESPN):

I'll take this opportunity to mention the Orlando Sentinel recently started its own general NBA blog called Nothing But Net. Dee Gugel, who filled in admirably for Schmitz during his break last summer, does a fantastic job and lends credibility to the Sentinel's sports coverage, which has taken some criticism lately.