The Magic Should Trade J.J. Redick This Summer and Get It Over With

Share All sharing options for: The Magic Should Trade J.J. Redick This Summer and Get It Over With 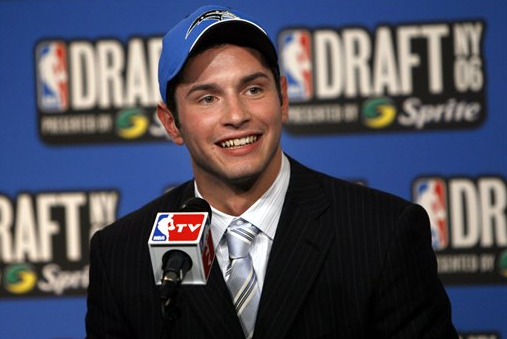 J.J. Redick, shown here moments after the Orlando Magic selected him 11th overall in the 2006 NBA Draft, asked the team to trade him if it doesn't expect to play him. It would behoove the Magic to grant his request.

When I attend Magic games at the Amway Arena, I participate in the raucous "WE-WANT-J.J.!" chants that start when garbage time does. I'm one of those obnoxious fans who goes nuts when he gets up off the bench and walks to the scorer's table. I stand up whenever he shoots so, when the shot goes in, I'm already prepared to cheer. I want J.J. to succeed in the NBA.

But, as much as I'd like for him to make a name for himself here, I realize it isn't going to happen. That's why the Orlando Magic need to trade J.J. Redick this summer.

The logic behind unloading J.J. is obvious: he doesn't play. And it's not a matter of coaching, either. J.J. averaged more minutes per game under Brian Hill -- he of the three-point-averse, defensive-minded philosophy -- than he did under Stan Van Gundy -- he of the three-point-happy, offensive-minded philosophy. If Redick, a three-point specialist, couldn't crack Van Gundy's rotation this year playing behind the likes of Maurice Evans and Keith Bogans, there's no reason to expect he will next year. Magic GM Otis Smith is on the record as saying J.J. could move from third on the depth chart to first due to Evans' free agency and Bogans' potential free agency (he has a player option). However, if either those players leave, the Magic would have only Redick available to play the two-guard position, and they'd certainly focus their free agency efforts on signing a veteran to play in front of Redick. In other words, J.J. won't be any closer to NBA relevance next season than he was this season... if he stays in Orlando, that is.

Tim Kawakami of the San Jose Mercury News notes that basketball fans and analysts tend to overvalue spot-up shooters like Redick (and Rashard Lewis, too), which is probably true. David Friedman of 20 Second Timeout, who also offered this evaluation of J.J. in July, remains similarly unconvinced that Redick will ever make it in the NBA, to heck with what professional trainer David Thorpe thinks. However, NBA teams always -- always -- want shooters to fill out their roster. How else to explain the popularity of Kyle Korver, Wally Szczerbiak, Peja Stojakovic, and James Jones, to name a few? To that end, we submit the Magic should fulfill J.J.'s trade request sooner rather than later. So, where should the Magic look? 3QC has four suggestions, in alphabetical order:

Maybe all this speculations will turn out to be an exercise in futility. Maybe Stan Van Gundy read -- and subsequently agreed with -- Kelly Dwyer's thoughts on Redick ("J.J. Redick, you have to believe me, needs more minutes. The team needs more low-turnover/high-yield players getting big minutes"). Maybe Keith Bogans does his best (worst?) DeShawn Stevenson impression and opts out looking for more money. Maybe the Magic decide it's not worth tripling Maurice Evans' salary to keep him. But for right now, it's a safe bet that J.J.'s NBA future rests with another team in another city, and it's certain that Otis Smith needs to consider trading him while he still has value.