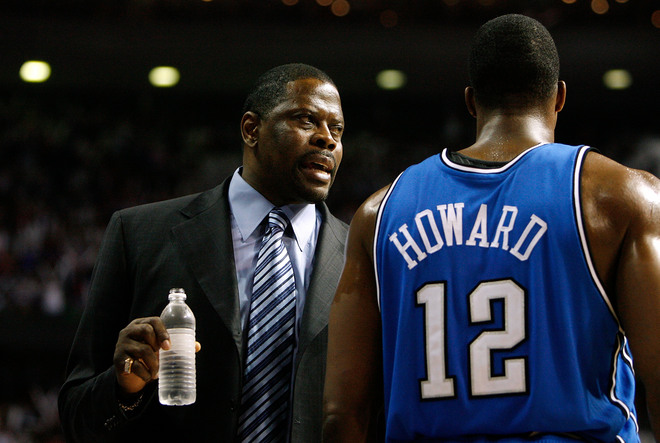 Magic assistant coach Patrick Ewing talks to Dwight Howard during a timeout. Knicks coach Mike D'Antoni has expressed an interest in adding Ewing, whom the Magic hired last fall specifically to coach Howard, to his staff.

Magic General Manager Otis Smith could not be reached for comment.

Ewing could not be reached for comment, either. According to the club, he is back at his alma mater, Georgetown University, to see his son Patrick Jr., graduate.

Howard has developed a special relationship with the former Knicks great, and the club believes his play and approach to the game have improved under Ewing's guidance.

If Dwight Howard wants Ewing to stay, you can bank on the team not granting Ewing permission to leave. Every decision this franchise makes revolves around keeping Howard happy. I can't find the article -- the Sentinel archives stories older than thirty days -- but when the team fired Brian Hill last summer, Howard's reaction was, "I was cool with it." Schmitz seems to think that Dwight would be decidedly not cool with Ewing departing. Then again, if Dwight and Patrick have indeed forged a bond, there's a chance Dwight will respect Patrick's wishes and let him return to the franchise he brought back to prominence some two decades ago.

My personal feeling? Ewing leaving wouldn't be too great a loss for this team. Obviously, I'm not there at practice every day (or ever) to see Patrick work with Dwight, but based on my observations in pre-game warmups and in-game performance, Dwight has not improved much under Ewing's tutelage. He has yet to develop a reliable jump-shot, nor has he mastered his post game. The good news is he's 22-years-old and still in his physical prime. He can still score 20 points a game on dunks, gimme layups, and free throws. The bad news is he can't get by on his athleticism forever.