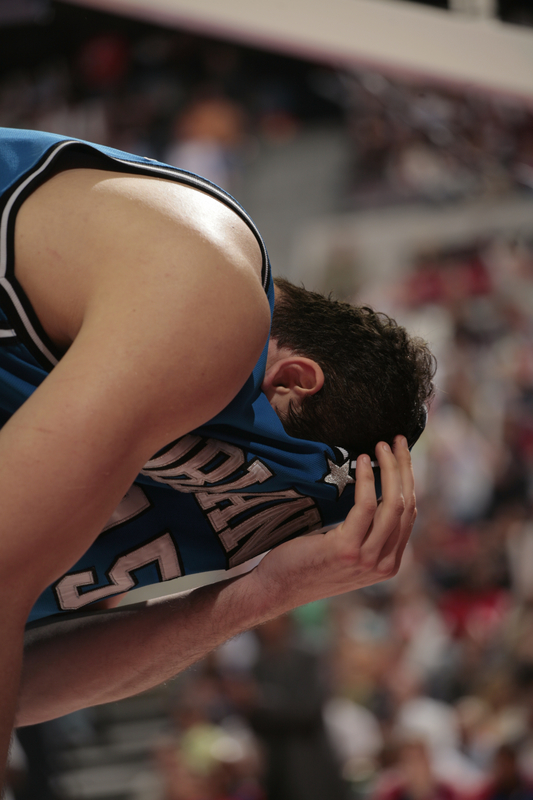 Hedo Turkoglu covers his nose after taking an elbow from a Detroit player. His Magic lose, 91-86, and were eliminated in the Eastern Conference Semifinals.

Those are the only numbers that matter when discussing this game. The Magic turned the ball over 21 times and forced just three turnovers themselves. Logic indicates that disparity won't get it done on any level of basketball, yet we almost stole one from Detroit tonight.

But in the end, the Pistons prevailed thanks to their clutch free-throw shooting and defense, not necessarily in that order. Looking at their defense -- not just the deflections, steals, and transition baskets, but the whole thing -- it's hard to imagine them losing more than three or four games the rest of the postseason. We actually performed (relatively) above-average in this series, with an offensive rating of 105.9, which slightly exceeds the Pistons' regular-season defensive rating of 104.2. But that's a bit misleading, because the Pistons really turn up the defensive heat when it counts the most. For most of the game, the Pistons play great defense. In crunch-time, they take it to a whole other level. We already saw the Pistons hold the Magic to 25% shooting in the fourth quarter of Game Three. Tonight, the Pistons held the Magic to 0 field goals for the first 8:18 of the final period. I repeat: the Pistons, missing their best player, held a 52-win team with the league's fifth-most efficient offense without a bucket for 8-plus fourth-quarter minutes.

We did plenty of things wrong tonight, but showed some poise at the end. We could have folded after watching the Pistons go on a 17-4 run to start the fourth period, but we didn't, going on a 7-1 run of our own to draw to within 1 point. A Rasheed Wallace miss careened out-of-bounds off a Magic player with 20 seconds to play, giving the Pistons had the ball and, more than likely, the game. The Magic were forced to foul, Rip Hamilton nailed his free throws (note: this is a pun; check the notes after the jump), but we still had a chance, trailing by 3.

On the last Magic possession of Game Four, Hedo Turkoglu took too much time sizing up Detroit's defense, giving his team no chance to get an offensive board if he missed the shot... which he did, as we know. Tonight, he wasted little time: he made up his mind that he would drive to his right around the defense of Tayshaun Prince and dunk the ball, cutting Detroit's lead to 1 and forcing the Pistons to enter a foul-shooting competition.

Prince had other ideas.

Although Turkoglu got the step on Prince, the lanky forward was recovered quickly enough to swoop in and block the dunk cleanly at the rim. Stop what you're doing right now (which is, I would hope, reading this post) and head over to Need4Sheed to look at the video. I'll give you a few seconds to pick your jaw up off the floor and/or wipe the tears from your eyes.

After the Magic fouled, Hamilton made two free throws to boost the lead to 5, and Detroit had the game in-hand.

And in a game marred by sloppy play by the Magic, it's fitting that their next possession ended with a turnover. Keith Bogans, firing the ball in from the left sideline, wanted to pass to Turkoglu, who cut toward the baseline under Pistons' basket. Bogans lead him too far and the ball sailed out of bounds. DEE-troit BAS-ket-ball. Hamilton hits two free throws. Bogans comes down the other end and makes a meaningless fingeroll, the Pistons inbound, and the clock expires.

But even in this close game in which they turned the ball over on one-quarter of their possessions (?!), the Magic might have been in it, or even won, if they had just made their damn free throws. Instead, they let their playoff inexperience show, and connected on 16 of their 28 free throws. As expected, Dwight Howard "lead" the way in the CLANK department, going 6-of-15 from the stripe. Howard's a notoriously awful foul shooter, but 40% is bad, even for him. Rashard Lewis, a usually accurate free throw shooter, went 4-of-6.

Throughout this season, many Magic fans found themselves lamenting a lack of a "Plan B" for the team to use when its three-pointers weren't falling. Tonight, their gameplan was to get Howard -- who struggled in Game Four, shooting 3-of-12 for 8 points -- involved in the offense early. And the team used this plan to a fault; they drove it into the ground. Several times in the first quarter, Lewis got the ball on the wing and assumed the triple-threat position, yet kept his eyes locked on Howard.

And rather than pass the ball to somebody else, or dribble, or shoot, or anything, Lewis would throw the ball to Dwight, even though both Lewis' and Howard's defenders had their hands in the passing lanes. The result? Turnovers. As we mentioned.

But it wasn't all bad, I suppose. Jameer Nelson, heavily (and unfairly -- I still can't get over that) criticized for his guarantee of a Magic victory, did his part to aid his team's cause. He scored 14 on 6-of-7 shooting, including 2-of-3 from beyond the arc. And he played solid defense on Rodney Stuckey for most of the night, although Stuckey warmed up as the game progressed. He showed poise, unlike Howard, his co-captain, who always looks flustered when he plays the Pistons. I hope some Pistons fans will at least respect Nelson's effort.

Perhaps surprisingly, this loss doesn't bother me too much. Yes, we played poorly, but it wasn't the sort of lazy/awful brand of basketball that killed us in our December-through-January slump. Yes, our season is over, but for the first time in a long time, we know we'll be back, and better, next season. We're relevant again, and have earned some respect around the league -- not enough, but some, which is more than we had last year.

And, on a more selfish note, the season ending allows me to do stuff I've missed out on over the past several months: spending time with my girlfriend, spending time with my cat, reading for fun, etc. And I can sleep easily knowing that this year was only the beginning of the climb back to elite status in this league.

So, Detroit advances to the Eastern Conference Finals for the sixth straight year. We can only hope to have similar success. Kudos to the Pistons and to their fans.