Referee Mike Callahan Gets Cold Feet, But All Anyone Wants to Talk About is Jameer Nelson

Share All sharing options for: Referee Mike Callahan Gets Cold Feet, But All Anyone Wants to Talk About is Jameer Nelson

As we covered earlier, there's no shortage of outrage/disbelief that Jameer Nelson, the Magic point guard who averaged a mere 10.9 points and 5.6 assists this season, guaranteed a victory for the Magic tomorrow night, and to a much lesser extent, that Rashard Lewis thinks the Magic are a better team than the Pistons. Oh, the nerve of that Jameer Nelson! How dare one of the team's captains expresses confidence in himself and in his teammates, even though they face impossible odds!

All that sound and fury -- seriously, he's the team's captain, and he's not going to guarantee a loss, so get over it -- relegates discussion of the non-call at the end of Game Four to the background. Admittedly, I wasn't that ticked-off about it, but then I read this update from John Denton. Stan Van Gundy is pissed. Emphases added:

"Let's just say this _ (Maxiell) is in the restricted area, it's a block at any other time of the season," Van Gundy fumed following Orlando's practice Monday morning. "(Referee) Mike Callahan raises his hand and you can see it on the tape _ his hand's up and his hand's down and I can't explain that."

Using the video from NBA.com, I tried to get screencaps of the non-call, which looks a lot more obvious here than it did live, from my vantage point in the upper bowl of Amway Arena. Here are the results: 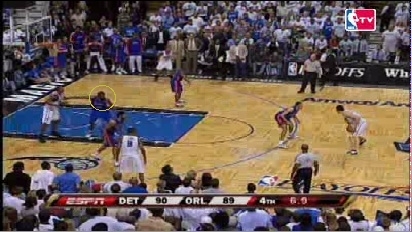 Fig. 1: The beginning of the play. Hedo Turkoglu (with the ball) is isolated against Tayshaun Prince about eleven feet above the foul line. Note Jason Maxiell, the figure I've circled in yellow, lurking in the painted area. And, if you're both a Magic fan and a masochist, take a look at the game clock on the lower-right of the scoreboard. 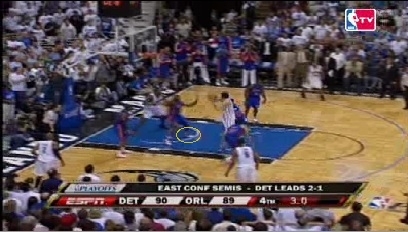 Fig. 2: Hedo, after driving left, elevates to take a shot. Note that Jason Maxiell has slid over to try to draw a charge, but his foot (circled in yellow) remains in the restricted area. Again, if you're a glutton for punishment, look at the game clock. Hedo took entirely too long to make his move, but that's not the point of this exercise. 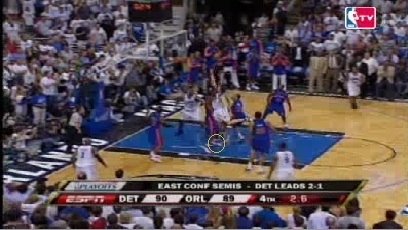 Fig. 3: Turkoglu, airborne, collides with Maxiell, still grounded. His foot is still inside the restricted area. 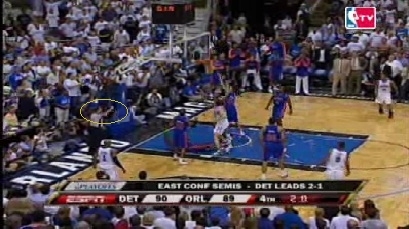 Fig. 4: Turkoglu misss the shot and his teammate, Dwight Howard, misses a tip-in. Two seconds remain on the clock. The thing to notice here is the baseline official, Mike Callahan, raising his right hand to signal a foul while using his left hand to put his whistle in his mouth. 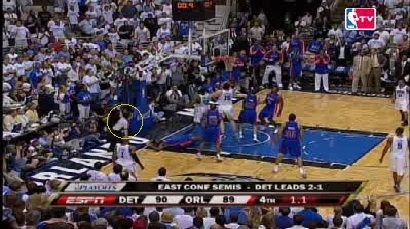 Fig. 5: not even a full second later, Callahan lowers his hand and decides not to call the foul. The game ends, but not before the head official, Joe Crawford, reviews the play on a courtside monitor. He rules that no foul occurred on the play.

IN NO WAY AM I SUGGESTING that Callahan or any of the officials have it out for the Magic, nor am I suggesting that his change-of-heart cost the Magic the game. There's no shortage of blame for that:

I merely aim to point out that this non-call (which the official clearly intended to call in the first place) made a tremendous difference in the game, certainly more than the infamous phantom three-pointer that Chauncey Billups made at the end of the third quarter of Game Two, yet no one is talking about it. Of course, the league will offer the standard conciliatory b.s. it always does in these sorts of situations, and nothing about this series will change. The Magic will still have to play Game Five in Detroit, facing a three-games-to-one deficit and incredibly long odds that they will advance.

Is it at all possible that the ref raised his hand to call the charge on Turkoglu but realized that Maxiell was in the restricted zone and put his hand down? Seems like a plausible explanation, right? Like, at least one worth considering in the interest of balance? I mean, the fact that Maxiell's foot was in the circle means he can't take a charge but it absolutely does not mean that anything he does in the circle is automatically a block.

I certainly wouldn't rule that out. Perhaps Callahan believed the game shouldn't end on a foul call, but that doesn't excuse -- at least not to me -- his decision to start to call a foul, then to change his mind.