Orlando Magic Captain Jameer Nelson Does His Job, Gets Criticized For It Anyway

Share All sharing options for: Orlando Magic Captain Jameer Nelson Does His Job, Gets Criticized For It Anyway 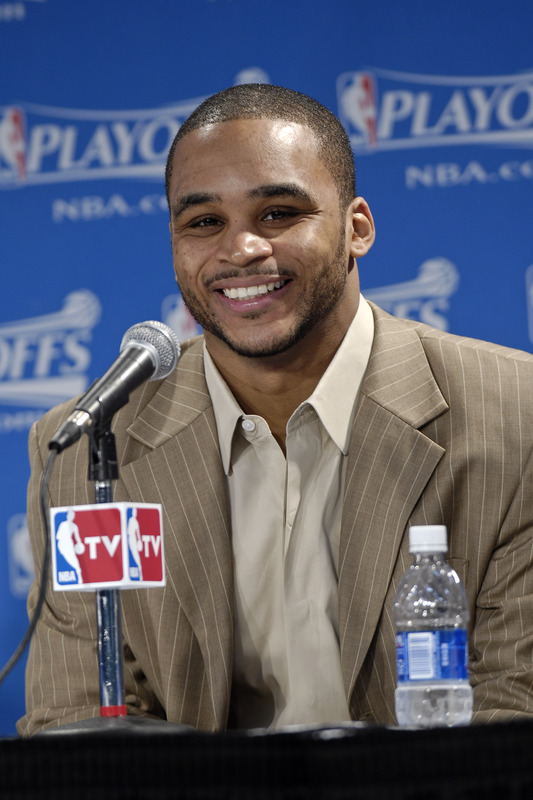 Jameer Nelson, seen here after the Magic beat the Raptors in Game One of the Eastern Conference Quarterfinals, told media on Saturday he expects the Magic to win Game Five in Detroit this Thursday.

There's simply too much hullaballoo surrounding Jameer Nelson's assertion of a Magic win tomorrow night for me to stand. Here are but a few expressions of outrage. If you missed it, here's what he said (from the Associated Press via ESPN.com):

Jameer is just doing his job, and not only as a player. It's easy to forget that, although he's the fourth option on offense, he and Dwight Howard are the official captains of this team. And since Dwight hasn't said much of anything since this series began, it falls on Jameer to stand up for himself and for the team. Instead of scratching my head (or pounding it against the wall), I'm more inclined to applaud Jameer for this move. No, he's not the best player on the team, but he is a captain, and he's doing what captains are supposed to do both on and off he court: lead. I'm sure Magic GM Otis Smith and coach Stan Van Gundy are pleased with their young point guard; they had a chat with both him and Dwight two months ago to discuss the importance of leadership.

That said, we'll all be much more impressed if Jameer backs up his talk by leading the Magic to victory tomorrow night, which he can do by distributing the ball and by -- more importantly -- not jacking 20-footers out of the flow of the offense.