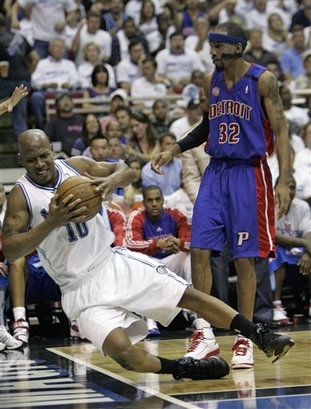 Keith Bogans hustles down a rebound and gets fouled by Richard Hamilton in the Magic's 90-89 loss to the Pistons on Saturday.

Keith Bogans doesn't get much national acclaim, probably because he's the seventh-man on an Eastern Conference team, and also because he's the fifth option on offense when he does play. But today is his 28th birthday, and he deserves some recognition. That'll do in lieu of a present, right?

Most importantly, Keith kept the floor spread for Dwight Howard to post-up and for Hedo Turkoglu to drive by making 148 three-pointers, more than double his previous season-high. The Magic set a team record with 801 three-pointers made, and Keith was a big part of that.

So, happy birthday, Keith Bogans. Enjoy it, but don't party too hard; we need you well-rested for Game Five this Tuesday in Detroit.