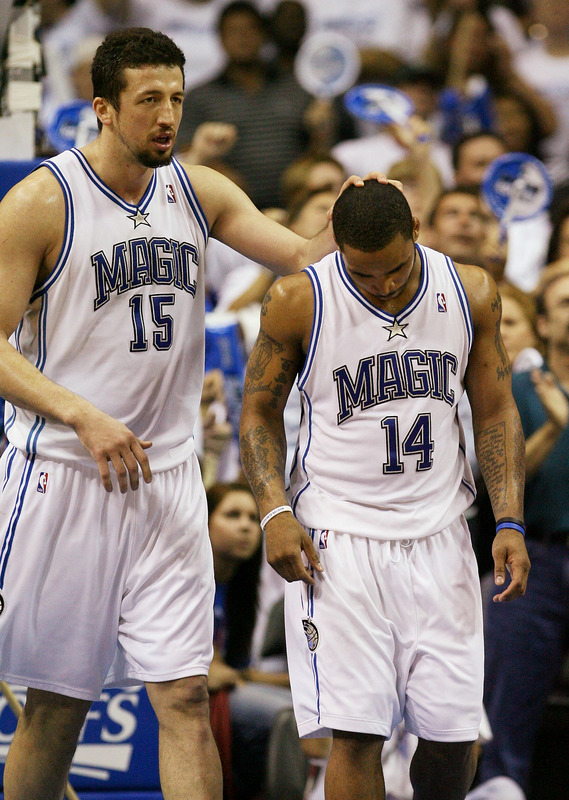 This game was ours for the taking, but we didn't take it. We had an 11-point halftime lead and bumped it up to 15 with a Maurice Evans three-pointer. All we had to do was to get two more stops and two more baskets. That's it. We could have gone up by 19 points and the Pistons would surely have packed it in. Instead, they went on a backbreaking 15-0 run, capped off by a fast-break dunk by Richard Hamilton.

And in the end, we only needed one basket to win. Tayshaun Prince hit a floater in the lane (thanks to an Antonio McDyess offensive rebound) to put the Pistons ahead, 90-89. Hedo Turkoglu, who scored 13 of his 20 points in the period, missed a driving layup over Prince at the buzzer to end the game and, essentially, the series. But it should not have come to that. We wasted too many opportunities to blame the loss squarely on Hedo's missed layup. Take a look at this laundry list of miscues:

Obviously, I'm disappointed we lost, but we still got some great efforts:

I say "just" 3 minutes for Marcin because he should have been on the floor longer. Dwight Howard had arguably his worst offensive performance as a professional, with 8 points on 3-of-12 shooting. He didn't make any shots after the first quarter. The Pistons took him out of the game by muscling him as he shot, and he did not get the benefit of the whistle. Perhaps intimidated, by their defense, he also rushed a few shots, including one put-back (3:08, second quarter) that the threw entirely too hard off the glass; all he needed to do was grab the rebound, come down with it, gather himself, and go up for the jam. With more rest -- he played the entire second half! -- he might have been able to tip-in Hedo's missed layup at the final buzzer. He might have been able to box-out McDyess (who finished with 14 rebounds) more effectively. And something tells me that Gortat would have been able to hold his own in Dwight's absence. But we'll never know for sure.

After Game Three, Yahoo!'s Kelly Dwyer wrote that we let the Pistons creep back into the game because "Jameer Nelson really enjoys shooting 20-foot jumpers." It's true. Nelson tends to settle for the jump-shot too frequently, and especially at the ends of quarters. He ended the Magic's last three first-quarter possessions on jump-shots, making the first and missing the next two. He finished with 6 assists and just 1 turnover, which is fantastic, but the 6-of-14 shooting isn't. And we covered the free-throw shooting.

That's a wrap, both for this recap and for this series. Game Five is Tuesday night in Detroit, and I expect the Pistons to close it out in big fashion on their home floor. They've earned it. Of course, I won't complain if the Magic steal one there... but I wouldn't bank on it.