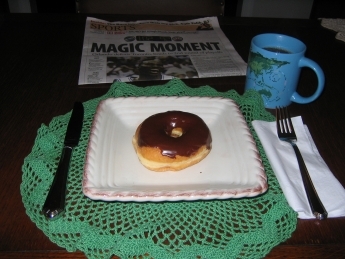 Dunkin' Donuts and the Orlando Magic: A Real Breakfast of Champions

All season long, the Orlando Magic teamed up with Central Florida-area Dunkin' Donuts locations to provide Magic fans with the opportunity to have a free donut the morning after each Magic win. There wasn't a catch: no minimum points-scored requirement, no ticket-stub requirement, no individual achievement requirement. All the Magic had to do was win, and all their fans needed to do was go to Dunkin' Donuts the next morning to reap the benefits.

Thankfully, this promotion carried over into the playoffs. So this morning, following last night's 102-92 win over the Raptors, which put the Magic in the second round for the first time since 1996, I sat down and enjoyed a chocolate frosted donut.

It was the most satisfying meal of my life.

Forgive the hyperbole, but the Magic's advancing is no small feat. Twelve years may not seem like a long time to a lot of you, but it sure does to me. When the Magic closed out the Hawks in the Eastern Conference Semifinals, I had just finished my second-grade year. Less than a week before the Magic beat the Raptors, I finished my second year of college.

But school isn't the only thing that's changed for me, personally, since the Magic last fielded a contending team. I've also met the woman I will one day marry -- love you, honey. I've been diagnosed for depression. I've had two stints in behavioral health clinics, one as recently as November. Hell, the only thing that's stayed the same is the house I call home. And, obviously, my love for the Magic.

That's why I had to fight back tears during the final moments of last night's win, which means more to me than my team advancing. It means I've been rewarded for supporting this team for all these years. So, too, has everyone else in the organization. Whit Watson says as much in his latest blog entry, in which he discusses the Magic mania taking hold in Orlando once more.

Two images from last night's game stick out to me as symbols of how the Magic have progressed, and neither of them ended up on any highlight reels. Before the game, Hedo Turkoglu was presented with the NBA's Most Improved Player Award in a ceremony at halfcourt. After posing for a few pictures with it and its presenter, Hedo called his teammates over to pose with him. They obliged: 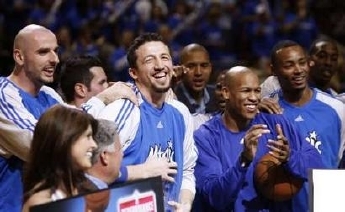 This team's camaraderie is unprecedented in franchise history. That photo shows just one of the literally thousands of expressions of Magic brotherhood we've seen this season. There isn't a single selfish player on the team. After years of employing players who valued themselves more than they valued the team -- and I won't name names -- it's refreshing to see a roster full of likable, fun-loving guys who just want to win.

The second image comes from late in the game, with the Magic's victory secured and both teams simply playing out the string. During a Toronto timeout, Stuff, the Magic's dopey-looking mascot, emerged from a locker-room tunnel wearing a grey hooded cloak and holding a sickle: Stuff became the Grim Reaper, and you can see it near the end of this video shot from the stands (Rated R for strong pervasive language). It was a fitting way to end the evening. The Magic showed the killer instinct they haven't had in over a decade by putting a team away when it counted, and their mascot was dressed for the occasion.

No matter what happens for the rest of the playoffs, the Magic will finish this season as successes, having re-established themselves as NBA-relevant and re-invigorated a formerly passive Orlando community. And I couldn't be prouder of them.