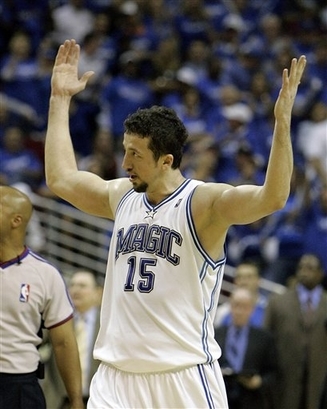 Hedo Turkoglu of the Orlando Magic encourages the fans at the Amway Arena to cheer during the final minutes of the Magic's 102-92 win over the Toronto Raptors on Monday night.

I've run out of things to say about this team, which is probably good, because I screamed myself hoarse along with 17,518 other fans at the Amway Arena. And after 12 excruciatingly long, cruel years of futility, disappointment, and waiting we finally did it: We won a playoff series.

After squandering an early 10-2 lead and sleepwalking through the first half, we came out strong in the third quarter and held the Raptors to just 18 points in the period. We fought for rebounds, contested every shot, and worked hard on our end, turning a one-point halftime deficit into a six-point lead heading into the fourth quarter, which we dominated, thanks in large part to the incredible crowd at Amway Arena. It's not as though we caught some lucky breaks, or that our guys hit lucky shots, or that Toronto affixed a stamp on this game and mailed it in: we earned this win, and it feels good. Real good.

Honestly, is there anything negative we can say about this team after watching its performance in this series? We still have trouble with turnovers, committing too many while not forcing enough on the other end, and our three-point shooting has been well below average, but the gutsy performances by each and every player have offset those deficiencies.

I think we might have earned the mantle of "Team No One Wants to Face" in the Eastern Conference for the rest of these playoffs.

And we're just in Year One of the Dwight/Rashard/Hedo/Jameer/Van Gundy Era.

And our three-pointers will drop in eventually.

Let's take some time to enjoy this series win, our first in 12 years, and to express our appreciation for the guys who brought it to us.

And, uh, for those of you who are interested: tickets for Round Two (!) go on sale Wednesday morning.

One last thing: if I were mean spirited, I would have titled this recap "Lame Canada!", but that would have been unfair to the Raptors, who played hard, and to their fans, who are a classy bunch.